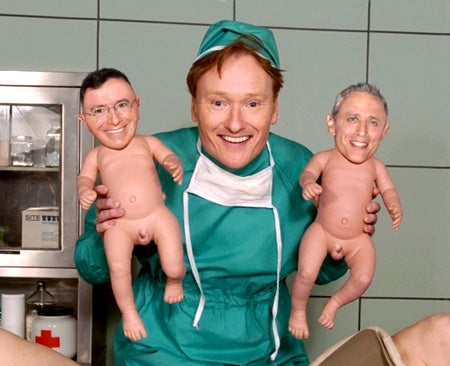 Everyone, it seems, except Jon Stewart.

The “Daily Show” host has been — for him — shockingly silent on the scandal.

I admittedly haven’t been watching “The Daily Show” that closely of late, opting instead to follow the fiasco unfold on NBC in real-time.

But I went back and watched the last week of episodes online and got some transcripts, and the Leno-Conan saga has been mentioned just once, on January 14, during a short, relatively innocuous bit in which “Daily Show” correspondent John Oliver is given a talk show in between “The Daily Show” and “The Colbert Report.”  (During the sketch, Stewart does manage to get in a quick zing on Jeff Zucker: “He is like the Cheney of television. He’s shooting shows in the face, he doesn’t care.”)

Stephen Colbert has made some passing mentions of the feud on his show (“Tonight, why won’t the president admit we’re in the middle of a war, or does he think the NBC situation will fix itself?”) but has yet to tackle it head-on.

All of which is odd, considering the camaraderie that has long existed among the writers for Conan, Stewart and Colbert. (Indeed, the incestuous nature of New York’s late-night comedy writers literally pre-dates blogging.)

I asked Comedy Central to explain the near-radio silence. They declined to comment.

O’Brien appeared on the “Daily Show” in 2008 with Colbert (and Colbert and Stewart returned the favor on “Late Night”) to settle a mock feud among the three hosts.