Whether the family is gathering around for a holiday classic or you need to entertain the kids or it’s time to kick back at night when you’ve got the TV to yourself (and an extra-strong egg nog in hand), these new DVD and Blu-ray releases will get you through the season.

Even viewers who felt burned by the live-action version could find themselves charmed by “Dr. Seuss’ The Grinch” (Universal Pictures Home Entertainment), the hit animated feature that had Benedict Cumberbatch (or his voice, anyway) stepping into the too-tight shoes of the legendary Christmas-stealer. The animators at Illumination expanded the original storybook’s visual palette in a way that felt both faithful and expansive, and the film manages to capture the humor and the sentimentality in just the right balance.

Also available: The Netflix documentary “The Toys That Made Us”: Seasons 1 & 2 (Screen Media) will get you thinking about all the Christmas presents you pined for in your youth; “A Cinderella Story: Christmas Wish” (Warner Bros. Home Entertainment) gives the classic tale a Yuletide updating, with a cast that includes Laura Marano, Gregg Sulkin and Isabella Gomez; the BYU-produced “Christmas Jars” (Deseret Book) follows a reporter investigating anonymous acts of kindness; an all-star cast (including Dick Van Dyke and Angela Lansbury) tells “Buttons: A Christmas Tale” (Paramount Home Entertainment); “Santa Fake” (Gravitas Ventures) mixes a naïve Irish immigrant, a suitcase of money and a jolly red suit for farcical effect.

One collection that should amuse adults as much as their children is Peanuts: 70th Anniversary Holiday Collection Limited Edition (Warner Bros. Home Entertainment), featuring all your go-to favorites packaged inside a genuine Sopwith Camel (better known as Snoopy’s doghouse). This collection features the three all-time classic Peanuts specials (“A Charlie Brown Christmas,” “A Charlie Brown Thanksgiving” and “It’s the Great Pumpkin, Charlie Brown”) along with six more favorites, and the doghouse also includes a Snoopy figurine and Charlie Brown book. A must for the Charles Schulz enthusiast of any age.

Also available: The DreamWorks Ultimate Holiday Collection (Universal/DreamWorks) features adventures with the characters from the studio’s animated features, including “Shrek,” “Trolls,” “Madagascar,” “How to Train Your Dragon,” “Home,” “Kung Fu Panda” and “Rise of the Guardians”; you either live in a “Paw Patrol”: Best in Snow! Collection (Nickelodeon/Paramount) household or you do not; the Swedish animated features “Finding Santa” (TriCoast Entertainment) takes a young orphan on a Christmastime adventure;  “Angela’s Christmas” (Mill Creek Entertainment) tells a tale from the memories of best-selling author Frank McCourt.

We Wish You a Merry Rom-Com

Also Read: Hallmark and Lifetime Have 70 New Holiday Movies - None With an LGBTQ Main Character

Also available: Down Home Christmas (Mill Creek Entertainment) offers a collection of five Lifetime titles — “A Christmas Contract,” “Hometown Christmas,” “Christmas on the Bayou,” “Wish Upon a Christmas,” and “Christmas in Mississippi”; Acorn TV offers up a trio of collections that mystery-lovers will want to own (or, conversely, find under the tree), with “Holiday Pop-Up Collectible” editions of “The Brokenwood Mysteries,” “Midsomer Murders,” and “Miss Fisher’s Murder Mysteries.”

Time for Some Classics

As a Christmas movie expert, I’ve had the privilege of putting together a pretty deep bench of holiday favorites, but we’ve all got at least a handful of movies that we look forward to enjoy again every December. Paramount Home Video brings two of the all-time classics out in sparkling new editions: “It’s a Wonderful Life” gets its very first 4K release (all the better to appreciate the deep shadows of Pottersville) while “White Christmas”: 65th Anniversary (Paramount Home Video) celebrates the longevity of this beloved Irving Berlin musical.

Also available: Another Bing Crosby fave sees him co-starring with Ingrid Bergman in “The Bells of St. Mary’s” (Olive Films), making its Blu-ray debut; also on Blu-ray for the first time are the moving British drama “The Holly and the Ivy” and Preston Sturges’ not-exactly-a-holiday-comedy “Christmas in July” (both Kino Lorber Studio Classics); “classic” might be putting too fine a point on it, but the Hulk Hogan farce “Santa with Muscles” (Mill Creek Entertainment), co-starring a very young Mila Kunis, also makes its first outing on Blu-ray.

Probably Not for Kids

Look, not all Christmas entertainment has to be family entertainment, right? So the adults in the room can enjoy the brilliant holiday caper film “The Silent Partner” (Kino Lorber), featuring a script by Curtis Hanson, and a very scary Santa played memorably by Christopher Plummer; the charming and bloody Christmas zombie musical “Anna and the Apocalypse” (Cinedigm); the 1983-set coming-of-age comedy “Feast of the Seven Fishes” (Shout Factory); and the Holiday Laughs 4-Movie Collection (which features a very mixed bag of movies, including “Daddy’s Home 2,” “Office Christmas Party,” “Trading Places,” “Surviving Christmas”) (Paramount Home Video).

Storybooks for Movie-Lovers of All Ages

And lest you think “physical media” applies only to DVDs and Blu-rays, two new storybooks will please the film buff in your life (or maybe encourage children to become one). “The Muppet Christmas Carol: The Illustrated Holiday Classic” (Insight Editions), written by Brooke Vitale and illustrated by Luke Flowers, takes the Muppet spin on Charles Dickens and captures it in bedtime-story-friendly prose and lovely visuals. And A “Die Hard” Christmas Gift Set (Simon & Schuster) includes Doogie Horner’s rhyming-couplet retelling of the R-rated classic, along with an ornament that turns Bruce Willis’ shirtless, bloody-footed John McClane into an adorable felt figure just right for any tree. 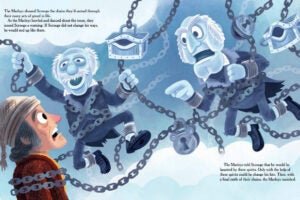 From ”South Park“ to ”Tales From the Crypt“ to Colonel Sanders… yes, the chicken guy

If you're looking for something a little different to listen to this holiday season, you've come to the right place. TheWrap has found some "interesting" options to your standard Sinatra, Buble or Mariah Christmas tunes that'll either have you singing along… or scratching your head.
View In Gallery