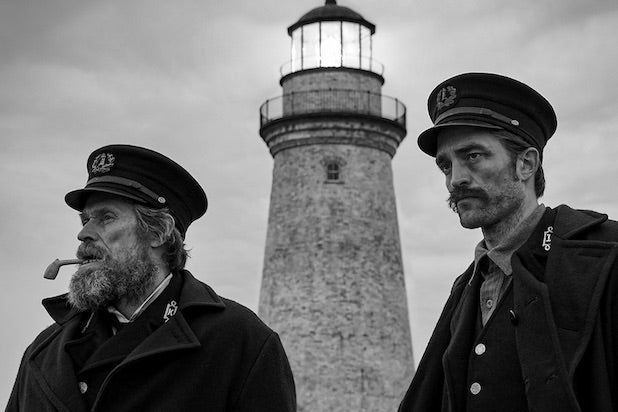 “The Lighthouse” (Lionsgate) is the kind of movie that yields new discoveries with every viewing, so why not make this new Blu-ray part of your permanent collection? Willem Dafoe and Robert Pattinson star as keepers of the titular structure, driving themselves and each other insane in a desolate and solitary location. Jarin Blaschke’s Oscar-nominated cinematography adds layers of grotesque delight to writer-director Robert Eggers’ fascinating follow-up to “The Witch.”

America’s stoner superheroes snooch one last bootch in “Jay and Silent Bob Reboot” (Lionsgate); Laurence Fishburne stars as a warden with a grudge in the drama “Imprisoned” (Cinema Libre Studio); Chace Crawford and Kevin Zegers navigate New York nightlife in “Nighthawks” (FilmRise); in “My Name Is Myeisha” (Shout Studios), a young black woman’s life reaches a turning point in an encounter with the cops.

Watch Video: Robert Pattinson and Willem Dafoe on Their Very Different Approaches to 'The Lighthouse'

Two extraordinary films from one of the world’s greatest directors get stunning new editions this month on home video: Pedro Almodóvar’s captivating and semi-autobiographical “Pain and Glory” (Sony Pictures Home Entertainment) tells the story of a filmmaker (played by Oscar nominee Antonio Banderas) at a crossroads, who must work through his physical and spiritual limitations to break through his creative blockage. In the Academy Award-winning “All About My Mother” (The Criterion Collection) from 1999, a group of women who have experienced loss come together and find strength in one another. Both are absolutely essential for any physical media library.

Also available: Armed teenagers roam the streets of Naples on behalf of their made-men bosses in “Piranhas” (Music Box Films); “The Merger” (IndiePix Films) sees a retired athlete and some refugees turning around the fortunes of a struggling Australian footy team; a writer fights for her place in contemporary Chinese society — and for some decent sex — in the feminist dramedy “Send Me to the Clouds” (Cheng Cheng Films); Gael García Bernal plans a Christmas Eve heist in the ’80s-set caper “Museo” (Kino Lorber), from director Alonso Ruiz Palacios.

A fourth-grader and a mythical creature strike up an unlikely friendship in the anime “Summer Days with Coo” (Shout Factory/GKIDS); Vanessa Redgrave and Timothy Spall are “Mrs. Lowry and Son” (Cleopatra Entertainment) in this biopic of British artist L.S. Lowry; Americans don’t get to see a lot of South Korean movies about the Korean War, but the acclaimed “Battle of Jangsari” (Well Go USA Entertainment), co-starring Megan Fox, is a rare exception.

“Britt-Marie Was Here” (Cohen Media Group) stars Pernilla August in a charming comedy about a woman taking on an unexpected new career in her 60s, directed by “Annihilation” co-star Tuva Novotny; a Chinese immigrant in Japan learns about love and food while fearing deportation in “Complicity” (Film Movement); filmmaker Fatih Akin’s “The Golden Glove” (Strand Releasing Home Entertainment) offers a disturbing glimpse at a 1970s serial killer; “Moving Parts” (IndiePix Films) examines human trafficking through the eyes of refugees in Trinidad and Tobago.

Also Read: Pedro Almodóvar on the Real-Life Fears and Aches Behind 'Pain and Glory'

Who decides what pieces of contemporary art sell for millions of dollars while others dwindle in value? And what does the pursuit of profit in the world of art say about society as a whole? These are just some of the topics that the provocative documentary “The Price of Everything” (Kino Lorber) seeks to tackle as director Nathaniel Kahn (“My Architect”) examines the constants and the contradictions at play in the marketing of aesthetics.

Also available: “Jim Allison: Breakthrough” (Giant Pictures) follows one man’s dogged pursuit to upend the science of treating cancer; the singular life of musician Gregor Piatigorsky and his impact on innumerable students is examined in the stirring “The Cellist” (First Run Features); “Church & State” (Breaking Glass Pictures) takes a damning look at the Mormon Church’s undue influence on politics in Utah, as activists sought to legalize same-sex marriage in the state.

OK, you know how we all have that movie poster or video box that we saw at a very early age and were left with lifelong trauma? That’s me and the one-sheet for 1971’s “Let’s Scare Jessica to Death” (Scream Factory), but now that it’s available in a new Blu-ray packed with extras – including a new commentary with the film’s director and producer, and interviews with the composer and a horror-film historian – maybe I can finally get over my childhood terror and give this movie a shot. Or maybe it will never live up to that original poster, who can say.

Also available: The “Countdown” (Universal Pictures Home Entertainment) smartphone app, which tells you how long you have to live, seems like a goof until, you know, people start dying on schedule; the Spanish countryside subs for the mountains of Northern California in the slasher saga “Edge of the Axe” (Arrow Video); if “Wrinkles the Clown” wasn’t creepy enough for you, the fictional “Gags the Clown” (Doppelganger Releasing) keeps the floppy-shoed nightmare fuel coming; a family learns their child’s disappearance might be connected to an alien invasion in “Dark Encounter” (4Digital).

Put-upon teens use the vampire in “The Shed” (RLJE Films) to get revenge on their tormentors; the brilliantly-titled “Kill Them All and Come Back Alone” (Kino Lorber) features Chuck Connors and a lot of Italians actors in a spaghetti Western classic; when a married couple sets out to restore a Victorian home, the last thing they expect to encounter is the “Girl on the Third Floor” (Dark Sky Films).

Jackie Chan stars as a demon hunter in the martial-arts comedy “The Knight of Shadows” (Well Go USA Entertainment); Dan Duryea struggles to prove his innocence in the noir mystery “Black Angel” (Arrow Video); in “The Nightshifter” (Shudder/RLJE), the gift of talking with the dead unleashes an unspeakable curse; Eric Red’s “Body Parts” (Scream Factory) offers a criminal psychologist tracking down the donor of his new arm, which seemingly has a homicidal mind of its own.

Scottish writer-director Bill Forsyth has all but disappeared from the international scene, but his 1980s films — including “Local Hero,” “Comfort and Joy,” “Housekeeping” and “Breaking In” — remain classics. And while some of Forsyth’s films are hard to track down, his breakout sleeper “Gregory’s Girl” (Film Movement Classics) makes its long-awaited U.S. Blu-ray debut. John Gordon Sinclair stars as the addlepated Gregory, a gawky teenager who falls hopelessly in love with the girl who replaces him as goalie on the school soccer team. It’s a sweetly hilarious coming-of-age tale, and this new Blu-ray features an audio commentary from Forsyth and critic Mark Kermode along with other extras. Whether you’re already a fan, or you’re one of those lucky people who gets to see this for the first time, this one’s a keeper.

Is there a version of Gwyneth Paltrow in “Sliding Doors” (Shout Factory) that never starts Goop? Just asking; with Rian Johnson enjoying the success of “Knives Out,” what better time than to revisit his breakthrough movie “Brick” (Kino Lorber); the double-feature disc “Dad” / “I’m Not Rappaport” (Mill Creek Entertainment) features the legendary comedy duo of Jack Lemmon and Walter Matthau — in separate movies.

“Big Little Lies”: The Complete Second Season (HBO/Warner Bros.) makes for a tricky recommend; on the one hand, they brought in acclaimed filmmaker Andrea Arnold, who proved herself to be a skillful crafter of women’s stories in films like “Fish Tank” and “American Honey,” but then producer David E. Kelley allegedly took her work into the editing room and chopped it into something else. That something else remains entertaining, of course, particularly with the introduction of Meryl Streep as a new fly in the ointment, but it’s hard not to think about what might have been as you watch these shorter-than-Season-One episodes. Even butchered, this is still riveting, soapy stuff, acted to the hilt by a talented ensemble.

Scratch your political itch with reality — “David Susskind Archive: Interview with Nikita Khrushchev” (MVD Visual) — or with satire that seems all too close to reality — “Veep”: The Final Season (HBO/Warner Bros.); Lucy Lawless goes from warrior princess to keen-eyed private detective in “My Life Is Murder” (Acorn TV), an acclaimed new Australian mystery series; “You”: The Complete First Season (Warner Archive Collection) knows where you live and wants to be with you, always.