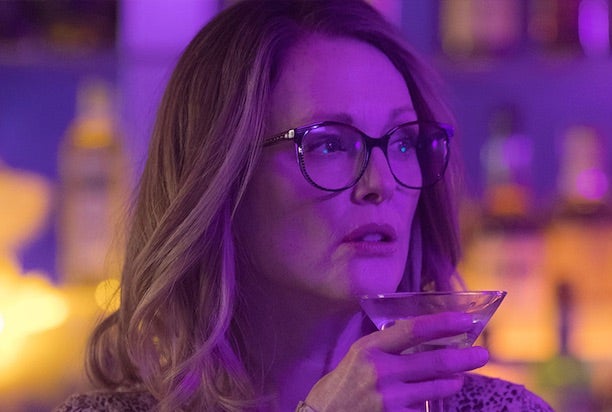 The track record of foreign directors remaking their own films in Hollywood has yielded few successes, but “Gloria Bell” (Lionsgate) wound up being a lovely exception to the rule. Sebastián Lelio (“A Fantastic Woman,” “Disobedience”) skillfully transfers his film “Gloria” from Chile to Southern California, with Julianne Moore giving a wonderfully vulnerable yet hopeful performance as a middle-aged divorcée who believes in the uplifting messages of the banal pop songs she sings along to on the radio. She’s surrounded by an impressive ensemble that includes John Turturro (as a bad-news boyfriend), Michael Cera, Holland Taylor, Brad Garrett (as Gloria’s ex), Chris Mulkey, Rita Wilson and Jeanne Tripplehorn.

Also available: Kristen Stewart and Laura Dern play the women behind the literary hoax that was “J.T. Leroy” (Universal Pictures Home Entertainment); things get “Kinky” (MVD) when a surgeon starts pushing her limits with her billionaire boyfriend; “The Kid” (Lionsgate) stars Ethan Hawke, Dane DeHaan and Chris Pratt in a new spin on an oft-told Western outlaw legend; Darren Criss gets “All You Ever Wished For” (Omnibus Entertainment) when he stumbles into a love spell during a trip to Italy.

June is Pride Month, and two acclaimed new period pieces from France explore LGBTQ lives from very different perspectives and using very different styles. Christophe Honoré’s “Sorry Angel” (Strand Releasing) follows a middle-aged author in 1993 who becomes the object of the affections of a twentysomething college student bursting out of the closet in an era when HIV treatment and prevention still lay ahead. As outrageous as “Sorry Angel” is naturalist, “Knife + Heart” (Altered Innocence) blends horror and sexuality (and a love of films like “Cruising”) as a string of gay porn actors in the 1970s wind up murdered by a serial killer. Stylish and unhinged, the film also boasts one of the year’s best scores, composed by M83.

Also available: A journalist who might be the son of legendary French pop star “Guy” (Icarus Films) shoots the singer for a documentary in the hopes of finding out the truth; “Modest Heroes” (Shout/GKIDS) compiles three short films from acclaimed anime producers Studio Ponoc; not to be confused with the Christian Bale movie, this new “Swing Kids” (Well Go USA Entertainment) is set in a POW camp during the Korean war; “Maze” (Lightyear Entertainment) tells the true story of 38 IRA prisoners escaping a high-security facility.

Did I mention that June is Pride Month? A quartet of new documentaries offer fascinating glimpses of LGBTQ lives now, and in the past. “Before Homosexuals” (First Run Features) reveals that queer people have always been around, throughout recorded history; the story of the fight for same-sex marriage in this country is told in “To a More Perfect Union: U.S. v. Windsor” (First Run Features); “Southern Pride” (Uncork’d) examines black and white gay-bar owners in the Deep South searching for common ground after Hurricane Katrina, and Berlinale hit “Game Girls” (Breaking Glass Pictures) looks at a lesbian couple trying to get themselves out of L.A.’s infamous Skid Row.

Also available: Children stand in for baseball players and the dopers who provided them with steroids in the cockeyed sports doc “Screwball” (Greenwich Entertainment); “The Good Breast” (Icarus Films) looks at women fighting cancer and contemplates the role of the mastectomy; Stuart A. Staples of Tindersticks overlays haunting music over pioneering nature footage in “Minute Bodies: The Intimate World of F. Percy Smith” (Icarus Films).

A gay Californian tracks down the last heir of the Holy Roman Empire in Christine Beebe’s oddball “Felix Austria!” (IndiePix Films); “The Brink” (Magnolia Home Entertainment) puts you closer to Steve Bannon than you probably ever wanted to get; “Cielo” (Juno Films) takes a dreamy look at Chile’s desert skies; Joan Baez, Pete Seeger and Odetta are among the guests in “Woody Guthrie: All-Star Tribute Concert 1970” (MVD), narrated by Peter Fonda and Will Geer.

Three very different docs explore food at its highest and lowest — “Michelin Stars: Tales from the Kitchen” (Juno Films) talks to chefs about their pursuit of the elusive ranking; Albert Adria tries to escape the shadow of his older brother Ferran (and his legendary restaurant elBulli) in “Constructing Albert” (Juno Films); and “Hot Doug’s: The Movie” (Random Media) follows chef Doug Sohn in his pursuit to build a better wiener.

With the notable exception of Kathy Bates’ Oscar for “Misery,” great performances in horror movies, particularly by women, tend to get overlooked. But a new Blu-ray provides the opportunity to appreciate Barbara Hershey’s subtle yet impactful work in “The Entity” (Scream Factory). The movie itself, about a single mother who finds herself repeatedly under attack by an invisible force, may or may not be your cup of tea, but Hershey’s emotional and physical commitment is undeniably powerful.

Mostly inaccessible for decades, Joan Micklin Silver’s “Between the Lines” (Cohen Film Collection) returns to home video in a beautiful new 2K transfer. One of the most underrated figures of 1970s American independent cinema, Micklin Silver (“Hester Street,” “Crossing Delancey”) delivers a gorgeous elegy for ’60s idealism with this story of an underground newspaper being bought out by corporate interests. (And if you live in a major American city, you’ve watched this exact scenario unfold at least once in the last several decades.) A buoyant cast of then-up-and-comers (including Jeff Goldblum, John Heard, Lindsay Crouse and Marilu Henner) helps make this a sparkling gem awaiting rediscovery.

Doris Day sports “Midnight Lace” (Kino Lorber) in this stylish, sudsy thriller from producer Ross Hunter; Edward Norton is “The Illusionist” (MVD Marquee), using every trick he’s got to win back his lost love; so this is love, and so this is the “Cinderella: Anniversary Edition” (Disney), just in time for the film’s 70th birthday in 2020.

Shelley Winters picked up a second Oscar for “A Patch of Blue” (Warner Archive Collection), playing the abusive mother of a blind girl who gets rescued by Sidney Poitier; Frankie Avalon makes a brief cameo and Annette Funicello hides her pregnancy in “How to Stuff a Wild Bikini” (Olive Films), a wildly-titled attempt to keep their beach franchise afloat; critic-turned-filmmaker Rod Lurie directs Samuel L. Jackson and Josh Hartnett in “Resurrecting the Champ” (MVD Marquee); IndiePix Films continues its release of 1980’s Zulu-language films with the Retro Afrika titles “Lola” and “One More Shot.”

Merchant-Ivory (and screenwriter Ruth Prawer Jhabvala) craft another witty, sumptuous Henry James adaptation with “The Bostonians” (Cohen Film Collection), now restored in 4K; the Universal Horror Collection, Vol. 1 (Scream Factory) features a quartet of vintage Bela Lugosi and Boris Karloff titles — “The Black Cat,” “The Raven,” “The Invisible Ray” and “Black Friday”; yes, the band got its name from the film “They Might Be Giants” (Kino Lorber), a charming comedy starring George C. Scott (as a man convinced he’s Sherlock Holmes) and Joanne Woodward (as his psychiatrist Dr. Watson).

Generation X is hereby invited to pour themselves a large bowl of cereal while they get comfy with two new compilations that capture a certain brand of 1970s television with perfect accuracy. “The Brady Bunch” 50th Anniversary TV & Movie Collection (CBS/Paramount) is an impressive box set that contains the original series, spin-off shows “The Brady Brides” and “The Bradys,” the movie versions (tongue-in-cheek and otherwise) and even the bonkers “The Brady Kids” Saturday morning cartoon.

And speaking of Saturday morning cartoons, “The New Scooby-Doo Movies”: The (Almost) Complete Collection and “The Best of the New Scooby-Doo Movies”: The Lost Episodes (both Warner Bros. Home Entertainment) pair your favorite van-driving sleuths with special guest stars that run the gamut from Batman and Robin to real-life figures like Phyllis Diller, Cass Elliot, Don Knotts, Sonny and Cher, and the Harlem Globetrotters. Even without “The Brady Variety Hour,” these compilations will blow your mind and make you nostalgic for shag haircuts and shag carpeting.

Also available: Joan Rivers wrote the screenplay for the darkly hilarious “The Girl Most Likely To…” (Kino Lorber), where Stockard Channing goes from abused ugly duckling to homicidal swan; the casting of Parker Posey as the nefarious Dr. Smith is one of many cool ideas in Netflix’s revamped “Lost in Space”: The Complete First Season (20th Century Fox Home Entertainment); a vain model learns about life when she’s reincarnated as a plus-size lawyer in “Drop Dead Diva”: The Complete Series (Mill Creek Entertainment).

A one-season wonder I still miss, “Swingtown” (CBS/Paramount) made a noble effort to turn 1970s bourgeois hedonism into serialized drama; the sisters behind bars are still doing it for themselves on “Orange Is the New Black”: Season 6 (Lionsgate); “Sara Stein – From Berlin to Tel Aviv”: The Complete Series (Omnibus Entertainment) follows an Israeli private detective and her adventures in Germany; John Krasinski doesn’t smirk at the camera even once in the action-packed “Tom Clancy’s Jack Ryan”: Season One (Paramount).

“The Venture Bros.”: Season 7 (Adult Swim/Warner Bros.) sees the intrepid teens and their makeshift family on more outrageous adventures; “The Simpsons” isn’t the only animated series holding on after multiple decades, and “South Park”: The Complete Twenty-Second Season (Comedy Central Home Entertainment) shows those subversive little brats are still making hilarious trouble; the great interviewers can talk to anyone about anything, and “The Dick Cavett Show”: Baseball’s Greatest Hits — The Pitchers (S’more Entertainment) sees the legendary host talking to some of the sport’s most legendary practitioners.

Decide for yourself if “Magnum P.I.”: Season One (CBS/Paramount) was a reboot worth rebooting; Sandra Oh is still killing it, in every sense of the word, on “Killing Eve”: Season Two (BBC Studios); Anthony Quinn made one of his final screen appearances in a made-for-TV adaptation of Hemingway’s “The Old Man and the Sea” (S’More Entertainment); Patty Jenkins directs her “Wonder Woman” leading man Chris Pine in the noir-flavored drama “I Am the Night” (Warner Bros. Home Entertainment).