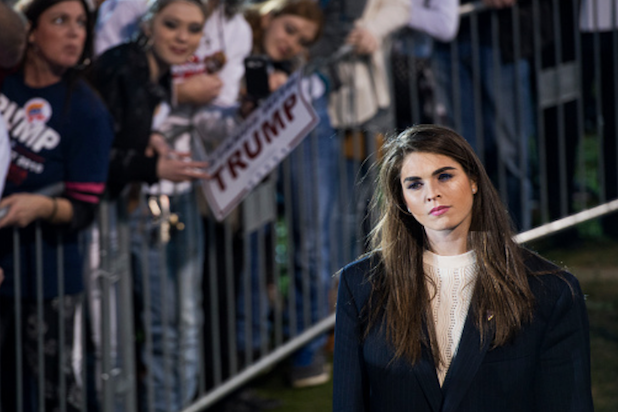 As White House communications director, Hope Hicks was best known for avoiding the spotlight. But if she’s finally ready to step into it, Hollywood crisis management teams have a few ideas about what she should do next.

Hicks, 29, was a political novice when she joined the Trump campaign. But she had enough political acumen to survive the administration’s tumultuous first year relatively unscathed.

“The obvious for her would be to start her own lobbying firm or work for a private lobby firm that helps companies and causes appeal to the White House,” Lou Shapiro, a criminal defense attorney who specializes in crisis management, told TheWrap. “She’s going to be a very useful commodity. How many people can say they have a direct line to the president?”

If Hicks goes that route, she’ll have plenty of time for a vacation first: Ethics rules require a one year “cooling off” period before becoming a lobbyist.

But Hicks wasn’t able to keep her name completely separate from recent scandals — and that could be an issue in the future. Earlier this month, then-White House Staff Secretary Rob Porter, a man she was dating, resigned amid accusations that he physically abused two ex-wives.

And this week, Hicks told the House Intelligence Committee that she told occasional “white lies” for President Trump, but never about anything of importance.

“She did just admit that she lied for the president. That’s a rather extraordinary admission from the communications department,” said Richard Levick, founder of the public relations team that bears his last name. “She has lots of options but there’s a big caveat there. And that asterisk is the [Special Counsel Robert] Mueller’s investigation. If she’s caught in that web, that might frighten potential employers.”

“If anything, despite being an unpopular president, folks will be more so interested to see where she lands, what she went through and want to hear her war stories,” Baird said.

“As women/public relations professionals, it takes a certain amount of personal strength and tenacity to represent the ‘powerful’ men we are hired by, and I admire her courage and determination thus far,” Baird added.

During her time in the White House, Hicks declined interviews and rarely spoke in public, perhaps out of concern that she didn’t want to outshine her boss. If she does decide to be more visible, the ex-model should have no trouble landing a TV job.

“I think if she wanted to work in the media as a commentator for Fox News, I’m sure they would clamor to get her,” Evan Nierman, founder of crisis PR firm Red Banyan, told TheWrap. “She could also charge a lot of money for speaking appearances.”

“The Trump apparatus often rewards loyalty,” Nierman added. “Once you’ve entered the inner-sanctum there are a lot of opportunities that are available to you.”