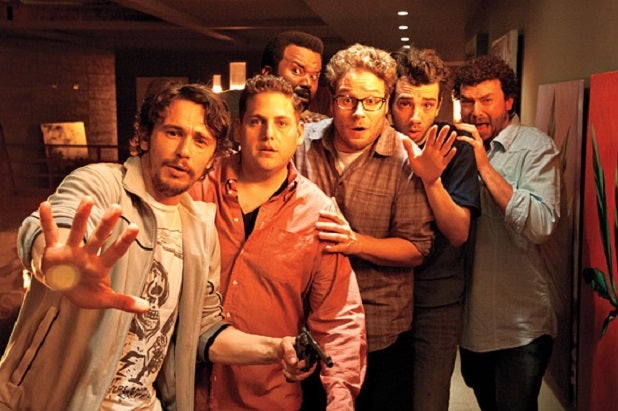 Sony this weekend re-released its raunchy Seth Rogen comedy “This is the End,” which came out in June, so that it could hit the $100 million mark in domestic grosses.

It’s doing the trick. After bringing in $2 million from 2,161 theaters it’s at $98.9 million, leaving it just a little more than $1 million shy of the box-office benchmark.

Also read: Can Raunchy Comedy ‘This Is the End’ Bring Hip to Heartland Box Office?

It should pass the mark sometime this week, and it will be the fifth summer comedy to do so. Fox’s Melissa McCarthy-Sandra Bullock buddy tale “The Heat” ($157 million), Sony’s Adam Sandler sequel “Grown Ups 2” ($130 million) and Warner Bros.’ “We’re the Millers” ($123 million) and “The Hangover Part III” ($112 million) have already done it.

With a production budget of $32 million and $116 million in worldwide grosses, “This Is the End” is clearly a financial winner for Sony. But bragging rights are nice, particularly since Sony had a tough summer with high-priced disappointments “After Earth” and “White House Down.”

Also read: Spike Jonze Delights With Sneak Peek of ‘Her': Fall In Love With a ScarJo Bot

The re-release of “This Is the End” likely got a boost from the recent TV airing of “The Comedy Central Roast of James Franco.”