You know all those reports about the death of the syndication business? They don’t apply to "Wheel of Fortune" and "Jeopardy!"

The gameshow stalwarts continue to demonstrate massive popularity, often times ranking as the most-watched show on a given station (beating primetime network fare). In the most recent national ratings, both shows were actually up vs. the same week in 2008 — bucking the trend toward audience erosion.

And then there’s the little matter of what just happened in Boston. 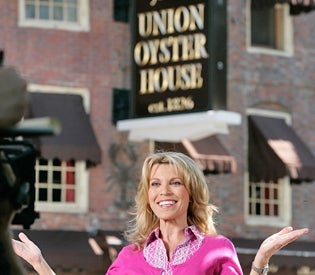 Earlier this month, the CBS duopoly in Beantown — which consists of Eye affiliate WBZ and independent station WSBK — made the decision to move "Wheel" and "Jeopardy!" from WSBK to the more powerful WBZ. "Entertainment Tonight" and "The Insider," which had been airing on WBZ, shifted to WSBK.

The results were pretty dramatic.

During their first week on the air, "Wheel" and "Jeopardy!" saw their total viewer ratings jump 58 percent on WBZ over their year-ago average rating on WSBK. (The game shows also grew in adults 18-49, though by a smaller 9 percent figure).

Even more stunning, however, was the boost to WBZ’s time period averages.

During their first week on WBZ, the gameshows improved the station’s average by an amazing 173 percent in total viewers and by 71 percent in adults 18-49 vs. what "ET"/"Insider" had averaged. Oh, and WBZ, which previously ranked fifth in the hour leading into primetime? It’s now in first place among total viewers.

The folks at CBS have to be happy about this turn of events, since Boston is a top 10 market. Having much stronger programming as a lead-in to the Eye’s primetime lineup certainly is a good thing for the CBS schedule. And the older-skewing "Wheel"/"Jeopardy!" combo certainly seems to be a better match with the Eye’s audience profile than past programming in the slot.

On the downside, CBS-owned WSBK has, not surprisingly, taken a hit, falling from second in the 7-8 p.m. hour to sixth. The station’s ratings in the timeslot are off 83 percent in viewers and 73 percent in adults 18-49.

Of course, all these numbers are just for one week. It’s possible many "ET" and "Insider" fans are still figuring out where their show went, and ratings could climb as they figure out the move.

Ed Piette, president and GM of both WBZ and WSBK, issued a press release before the switch predicting long-term success because of the move.

“We think this programming change better pairs the shows with the stations, and it will make the most of companion programs optimizing the flow of viewership thus giving both stations and each program its best chance at success,” he said.

Actually, given the enormous power of "Wheel" and "Jeopardy!," the only real question about the decision to switch the shows to the more powerful (and more important) WBZ is: What took so long?