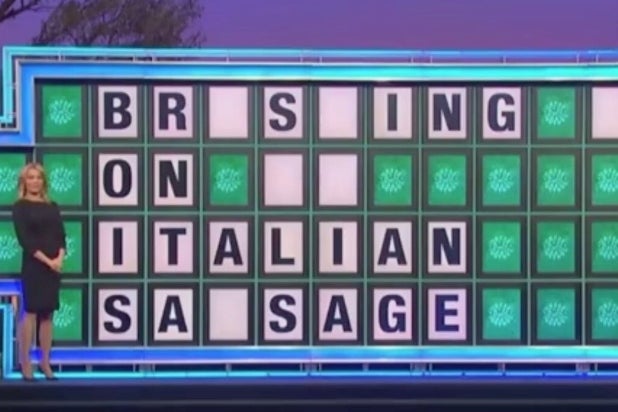 One “Wheel of Fortune” puzzle from Thursday’s episode had some viewers cracking up over a rather naughty sounding combination of words involving “Italian sausage.”

The phrase was deciphered by contestant Adam Goodell, who scored $2,450 and move on up to the bonus round for correctly guessing the phrase: “Brushing up on my Italian sausage.”

See the puzzle below:

As one can imagine, Twitter had a field day with that one, with several users giggling over it’s “lurid” and “kinky” undertones.

One user tweeted, “Bruh what intern just made the puzzle on wheel of fortune “brushing up on my Italian sausage” I’m dead.”

Another called the phrase “one of the most lurid-sounding #WheelofFortune puzzles ever.”

“I think the jokes write themselves,” said another.

Fed up with all the jokes, another explained exactly how the game show’s signature “Before and After” puzzle works.

“Everyone who watches Wheel should know how the “Before and After” works! Brushing up on my Italian – Italian Sausage. For crying out loud!” she tweeted. “Family Feud makes way more sexual references daily. No one gripes about that.”

Why so petty? Everyone who watches Wheel should know how the "Before and After" works! Brushing up on my Italian – Italian Sausage. For crying out loud! Family Feud makes way more sexual references daily. No one gripes about that.

This reminds us of the time when that one contestant, Melanie, incorrectly guessed “Bridal and gold shower” with only one letter left, instead of the correct answer, which was “Bridal and cold shower.”

Not sure what kind of showers Melanie is into, but we don’t judge.

And here are some more silly game-show fails, if you’re into that sort of thing.

“Wheel of Fortune” is hosted by Pat Sajak and Vanna White. It was created by Merv Griffin, and the first episode of the classic American game show aired in 1975.

“Brushing up on my Italian sausage” may be one of the most lurid-sounding #WheelOfFortune puzzles ever.

So apparently the solution to a puzzle on Wheel of Fortune yesterday was “Brushing Up On My Italian Sausage” … and I think the jokes write themselves ???????????? pic.twitter.com/J2OiIqJXQN

Well, Valentines Day is upon us. Better brush up on my Italian Sausage. @WheelofFortune I’m still thinking of you. Lol #bestpuzzleever