“When Lambs Become Lions,” a new documentary about African elephant poaching, reveals that the fight to protect these animals is far more complicated than one would imagine.

The first trailer for the documentary film, which TheWrap is sharing exclusively, shows the fight from both perspectives. Director Jon Kasbe spent years embedded with both a small-time ivory dealer who is willing to break the law to provide for his family as well as a man willing to put elephant lives over human life and who operates like no ordinary conversation ranger.

“These are charismatic, complicated, and relatable men who do illegal or abhorrent things. I didn’t understand them, and I wanted to,” Kasbe said in the press notes for “When Lambs Become Lions.” “I wanted to explore their complexity and remain open to understanding things that were much easier to hate. The only way to do that–for an outsider like myself–was to become part of their lives without judgment.”

The two men profiled in “When Lambs Become Lions,” X and Asan, both use fake names, but they’re more than willing to show the extent of their crimes on camera. X is an ivory dealer and poacher, who learned how to hunt from his father. He views hunting as part of his heritage and lifeblood. Now he and other hunters use the trade in order to provide for their families.

“The first thing to know is, I have a special gift,” X says in the intense trailer. “I have no fear in my heart.”

Meanwhile, Asan is a wildlife ranger sworn to protect the plummeting elephant population after once poaching elephants himself. But he brandishes assault rifles and is more than willing to kill a poacher if it means saving the life of an elephant. The documentary grapples with their morality and the complications surrounding the conservation effort as it relates to government politics, economics and race.

Kasbe added in the press notes for the film that he went on 10 different elephant hunts, observing the poachers in hunts that could last days. However, while “When Lambs Become Lions” depicts the plight of elephants, no actual animals are shown harmed in the film in any way.

Also Read: 'I Am Not Alone' Trailer: Armenia's 'Velvet Revolution' Starts With a Step in New Documentary (Exclusive Video)

Matthew Heineman, the director of the Oscar-nominated “Cartel Land,” executive produced “When Lambs Become Lions.” Similarly to Heineman’s film, it’s shot with striking, slick cinematography befitting a fictional wartime thriller. The film won the Best Editing award when it made its premiere at the Tribeca Film Festival this spring and was nominated for two IDA Documentary Awards, including for Best Cinematography and Best Editing on Wednesday.

Kasbe also produced “When Lambs Become Lions” with Tom Yellen, Innbo Shim and Andrew Harrison Brown. Oscilloscope Labs is distributing and will open the film in Los Angeles on Nov. 22, followed by New York showing on Dec. 6, and finally a national rollout over the following weeks.

Watch the exclusive first trailer above, and check out the official synopsis and poster below:

In the Kenyan bush, a small-time ivory dealer fights to stay on top while forces mobilize to destroy his trade. When he turns to his younger cousin, a conflicted wildlife ranger who hasn’t been paid in months, they both see a possible lifeline. The plummeting elephant population in Africa has captured the attention of the world, and as the government cracks down, both poachers and rangers face their own existential crises–what is the value of elephant life relative to human life? And can we understand these hunters who will risk death, arrest, and the moral outrage of the world to provide for their families?

Director Jon Kasbe followed the subjects of “When Lambs Become Lions” over a three-year period, gaining an extraordinary level of access and trust on both sides of the ideological and ethical spectrum. The result is a rare and visually arresting look at the perspectives and motives of the people at the epicenter of this conservation crisis.

Note: “When Lambs Become Lions” is committed to showcasing the plight of elephants however it does NOT depict animals of any kind being harmed. 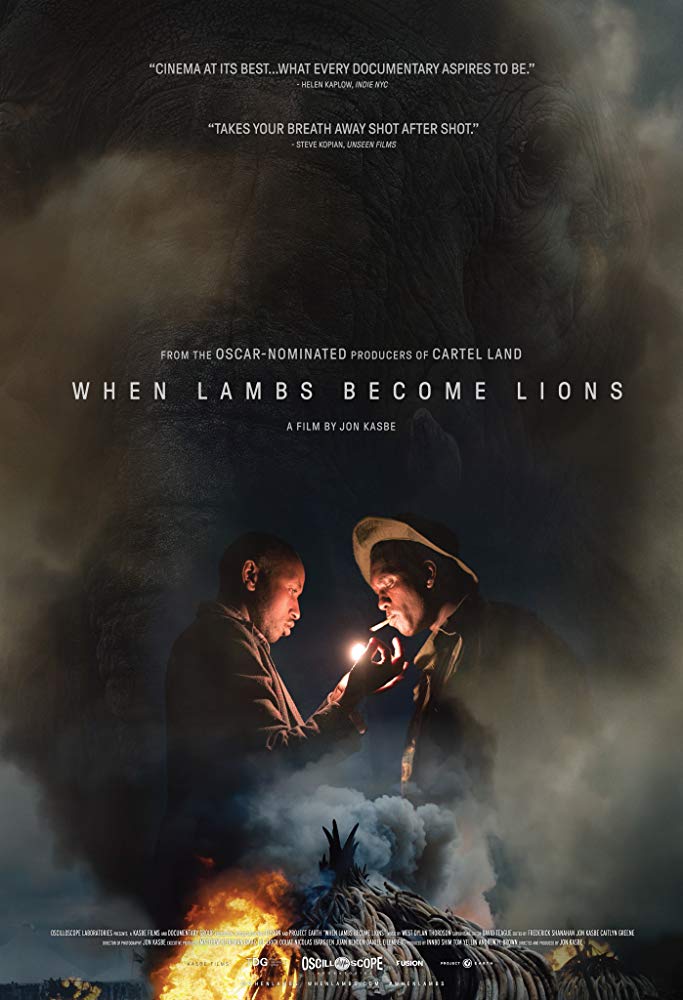