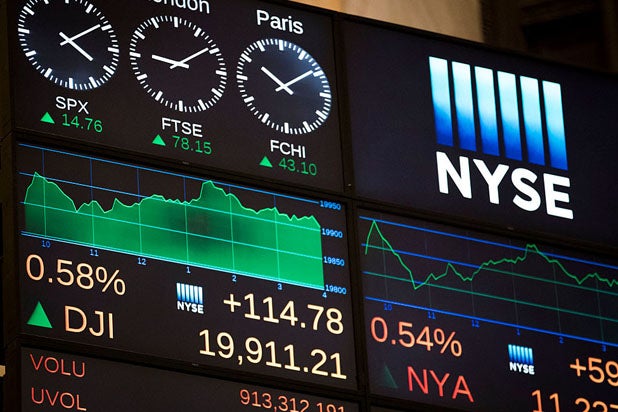 The magic 20,000-point target for the Dow Jones industrial average seems almost asymptotic at this point, as the index hasn’t managed to break through that barrier despite coming about as close as possible without doing so.

But the wait may be over soon.

The Dow topped out at 19,999.63 on Jan. 6 — so close that any one of the 30 equities that make up the average could have put it over 20,000 if its stock price went up by a nickel. Still, with earnings season just getting started, it seems like a decent bet that the Dow will cross 20,000 at some point… although there are certainly skeptics.

If it does happen soon, several signs point toward Wednesday, Jan. 18 as the fateful day.

That’s when Goldman Sachs, the mega-bank and breeding ground for Trump administration appointees, will report its fourth-quarter earnings before the market opens. With Goldman being the most heavily weighted stock in the Dow, making up 8.4 percent of the index, a strong performance could be enough to carry it through that 20,000 barrier.

There are several reasons to believe that could be the case. Financial stocks in general have been among the biggest beneficiaries of the Trump rally, as investors figure his policies and likely deregulation will increase their profitability. That faith has been rewarded in the share price of the three banks that kicked off earnings season, as JPMorgan Chase, Wells Fargo and Bank of America all opened and ended the day higher than the previous day’s close after reporting earnings Friday morning.

Goldman could be in even better shape given how close the president-elect is to that particular institution — and how much he seems to value loyalty.

Six members of Trump’s proposed administration — including prospective Treasury Secretary Steven Mnuchin and senior White House adviser Anthony Scaramucci — are alums of the powerful investment bank. Trump and his team have also repeatedly pledged to do away with much of the Dodd-Frank Act, which could remove limits on speculative investments and allow banks to make more profit — and of course, fall harder if they don’t turn out well.

Also, Goldman has a recent history of significant pleasant surprises during earnings season, beating expectations by more than 20 percent for three of its last four reporting periods. The company’s stock jumped 2 percent on Oct. 18 after reporting third-quarter earnings that beat predictions by 26 percent. If the index starts the day Wednesday in striking distance of 20,000, a similar beat and reaction from Wall Street could get it over the top.

Not everyone’s a believer though: Citi downgraded the stock Tuesday, rating it a “sell” in light of its more than 30 percent surge since Election Day, pushing Goldman’s share price down as much as 1.6 percent. And due to its outsize weight in the index, that made Goldman the biggest drag on the Dow Jones industrial average.

It’s too simple to say as goes Goldman, so goes the Dow, but a substantial move up or down in the finance behemoth’s stock could be enough to finally push it past 20,000. It might just happen, appropriately, on hump day.