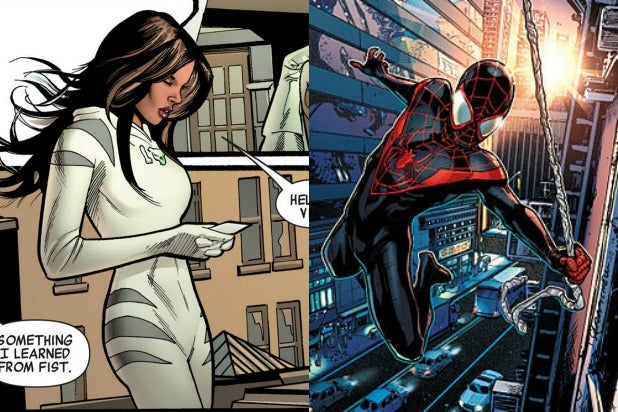 Already a bonafide hit after its first weekend in theaters, “Captain America: Civil War” has all the appearances of diversity, including strong women and characters of many different cultural backgrounds.

But the heroes in the film — and in the entire Avengers cinematic universe for that matter — fail to reflect at least one of Marvel’s most steadfast groups of fans: Latinos.

Hispanics are the fastest growing ethnic group in America, and in 2013, for example, accounted for more than 20 percent of opening weekend ticket sales for every summer blockbuster movie. The MPAA reported that Latinos accounted for 23 percent of movie tickets sold overall in 2014 — double the respective percentages of all other ethnic minorities tracked.

The Latino moviegoing audience continues to grow in the U.S., and represent a fervid fanbase for “Civil War.”

“Based on pre-released tracking, Marvel movies over index with Hispanics,” noted Umberto Gonzalez, editor-in-chief of HeroicHollywood.com, who observed it happening with “Civil War.”

So where are the Latino superheroes in Avengers films?

“It’s a slow process — all these diversity initiatives,” argued Gonzalez. “Though Marvel is a very inclusive company.”

The problem is not Marvel’s alone to bear. It’s systemic within Hollywood as a whole, some insiders argue.

“You’re not seeing studios taking young Latino talent to be cultivated on the film side,” a Latino executive at a film company told TheWrap. “If you notice, the leads in Marvel movies are already-established film stars when they’re given a film.”

That makes it difficult.

And Marvel is casting some Hispanics — just not as Avengers. Zoe Saldana, under a lot of green, plays Gamora in “Guardians of the Galaxy.”

Michael Peña also played a supporting role in “Ant-Man,” but the way he was depicted — and a line he utters about deportation — proved to be a breaking point among a vocal group of frustrated Latino fans. Irritation over Peña’s jokey line helped fuel a meme calling for more Latino heroes in Marvel films:

@elmayimbe #heroicinsider How long do you think until we have a Hispanic superhero leading a movie? pic.twitter.com/35NnJqWYQj

“They don’t have to use a deportation joke,” argued Gonzalez. “Cut the line and it’d still be effective.”

The film exec who spoke with TheWrap added: “Hispanic audiences crave representation, but they don’t want to feel pandered to. It’s a nuanced problem.”

When it comes to diversity in the MCU, it starts with the source material provided by the comic books. (Marvel declined to comment for this article.)

While Marvel has depicted more Latino characters in print over the years, there aren’t a whole lot of extremely famous Hispanic superheroes — yet. As the meme suggested, Marvel could develop a film franchise around Miss America, a/k/a America Chaves, or the new Ghost Rider, now inhabited by the Mexican-American character Roberto “Robbie” Reyes.

Miles Morales, the so-called “Black Spider-Man,” is of African-American and Latino descent. He takes on the identity of Spidey after Peter Parker dies. Or Marvel could feature the newer White Tiger, Ava Ayala, who took on the mantle of the hero after the deaths of both her brother Hector and her cousin Angela. (Her character is mentioned in Marvel’s Netfilx show “Jessica Jones,” perhaps some foreshadowing.)

“Marvel doesn’t do anything by accident,” noted Gonzalez, adding a gripe: “Latinos die in the comic books and they stay dead.” He was referencing the original White Tiger a/k/a Hector Ayala. “They killed him in 2002 and I’ve been annoyed ever since.”

The major Latino heroes are largely much newer to Marvel’s comic books. Miles Morales launched in 2011, for example, the same year Ayala debuted in print. By comparison, Black Panther, who is about to get his own movie, has been around since 1966.

“A Black Panther movie has been in the works for years. It didn’t happen overnight,” Gonzalez observed.

While the possibilities for a Latino Avenger aren’t necessarily endless, there are enough Hispanic Marvel characters to draw from to be included in the MCU, and, yes, inside the coveted Avengers superhero circle.

As fans have been voicing impatience, Gonzalez is confident that change is on the horizon. “It’s going happen within 10 years. It’s gonna happen for sure.”