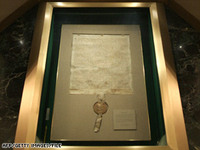 Sexy, isn’t it? It’s the Magna Carta, one of apparently 20 known original copies of a charter issued  in 1215 that set us — yes, us, we the lotus eaters who bask in the land of the free and the home of the brave — on the path to individual rights separate and apart from the whim of a ruler. Sotheby’s has announced that this document will be sold by its owner, the Perot Foundation (named for its founder, the singular entrepreneur Ross Perot), which would rather give the proceeds to charity than continue to underwrite it. Since 1984, when the foundation bought it from a British family, this Magna Carta has been exhibited in The National Archives in Washington DC, and is one of only two copies outside of the United Kingdom, according to the auction house. Who will buy this document, expected to fetch between $20 and $30 million? A Silicon Valley zillionaire? A hedge fund honcho? Where ought it be? If there is any document that deserves to be in the public eye in a democracy, this one may well top on the list. At a time when the term ‘habeas corpus’  seems a quaint anachronism, the document that enshrined that right may be removed from public view. Its sale makes questions of ownership of and access to important symbols seem more urgent than ever. Here’s a thought: maybe Norman Lear, who, after all, bought the Declaration of Independence, will buy it and set up a permanent exhibit somewhere, say, the office of the Attorney General. Wait — I just had a better idea. Maybe there’s a Greek shipping magnate who can be persuaded to buy it, and swap the Magna Carta for the Elgin marbles missing on the Parthenon. That, somehow, would be cultural patrimonial justice.