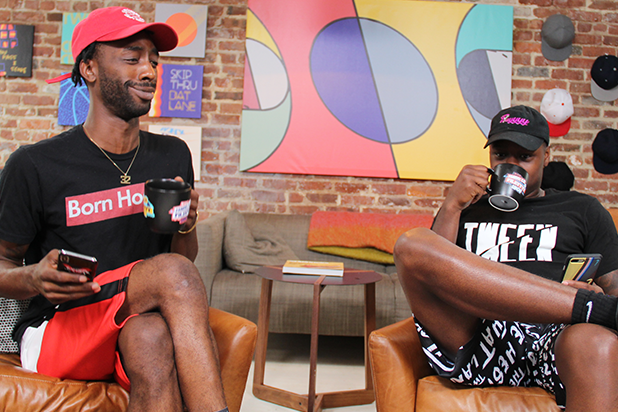 Whistle Sports, the digital media company whose investors include NBC Sports and Sky Sports, is launching a new series on Facebook Watch on Tuesday, “Famous Los and Filayyyy Show.”

In the new series, Famous Los and Filayyyy, two Instagram stars with a combined following of more than two million fans, will offer comedic commentary on some of the most viral basketball moments across the game. Special guests will include model Don Benjamin, NBA players Jeremy Pargo and DeVonte Graham and former NFL player Anthony Adams (Spice Adams).

“We believe in funny and relatable content that takes a unique approach to traditional sports. Nobody better encapsulates that than Famous Los and Filayyyy, which is why they have resonated so well within the culture of basketball,” said Joe Caporoso, VP of Social Media at Whistle Sports. “We want to bring talent like this new formats, distribution and production to further their overall reach.”

“Famous Los and Filayyyy Show” will be the sixth Facebook Watch series launched by Whistle Sports since the start of the year. According to the company, it decided to launch the series on Facebook Watch instead of YouTube because not only does Famous Los and Filayyyy over index with young males who use Facebook, but they are looking to create content that allows them to interact with fans, which, through fan groups and comments, Facebook’s ecosystem allows.

“This show is our take on what a modern basketball should look like and how it should be distributed, particularly when it comes to utilizing Facebook Watch, Facebook fan groups, IGTV and Instagram stories,” added Caporoso.

“Famous Los and Filayyyy Show” will join Whistle Sports’ other Facebook Watch series including “The Loop,” “Bad Jokes,” “No Days Off,” “Courtyard: Unstoppable,” and “Whistle Worthy,” all which were launched over the past 10 months.

“We have been excited about the developments in our slate of content throughout 2018. Our most recent season of ‘No Days Off’ launched with an episode featuring Blaze Ingram that has racked up 4 million views on Facebook and another 6 million on YouTube,” Caporoso said when asked about the performance of Whistle’s Facebook shows. “We have a strong, growing community of fans around this franchise, particularly on the show page. Elsewhere, we launched a UGC- [user-generated content] centric page called ‘Whistle Worthy’ that has climbed to almost 400,000 followers in a little more than four months.”

Launched in 2014, Whistles Sports has raised more than $50 million from investors including NBC Sports, Sky Sports, Tegna and U.K.-based venture-capital firm Beringea. According to the company, it has an aggregate social audience of more than 450 million followers and a rapidly growing revenue stream with a 52 percent year-over-year growth rate and 132 percent compound annual growth rate.