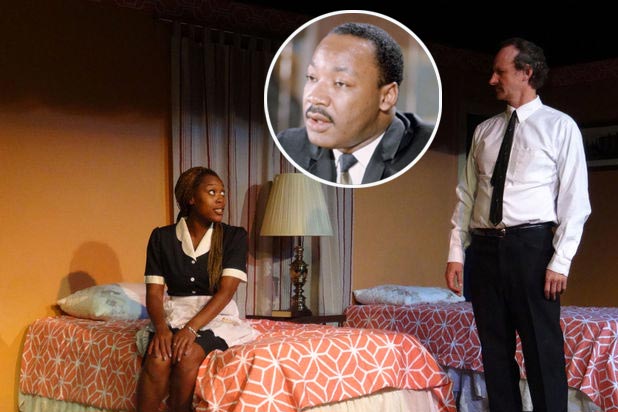 Katori Hall, whose award-winning play “The Mountaintop” depicts Martin Luther King Jr. and a motel maid on his last night on earth, has denounced a recent production at Ohio’s Kent State University that cast a white actor as the slain civil rights leader.

“While it is true that I never designated in the play text that King and Camae be played by black actors, reading comprehension and good-old scene analysis would lead any director to cast black or darker-complexioned actors,” she said in an essay published Monday on TheRoot.com.

“Hell, even in Russia, where black actors are scarce, the theater moved mountains to cast two black actors for the reading,” she wrote of her play, which opened on Broadway in 2011 in a production starring Samuel L. Jackson and Angela Bassett.

In response to the amateur production at Kent State, Hall has added a clause to the licensing agreement for “The Mountaintop” demanding approval from the author before casting an actor who is not African-American or black.

For the Kent State production, which premiered in September for six performances at the university’s Department of Pan-African Studies African Community Theater, director Michael Oatman double-cast the role of King with a black actor and a white actor.

“I believe that the American theater is one of the last safe places we can experiment and explore,” Oatman told KentWired.com.

Hall said she had also spoken to Oatman, who told her the casting choice was an experiment in “racial ownership and authenticity.” 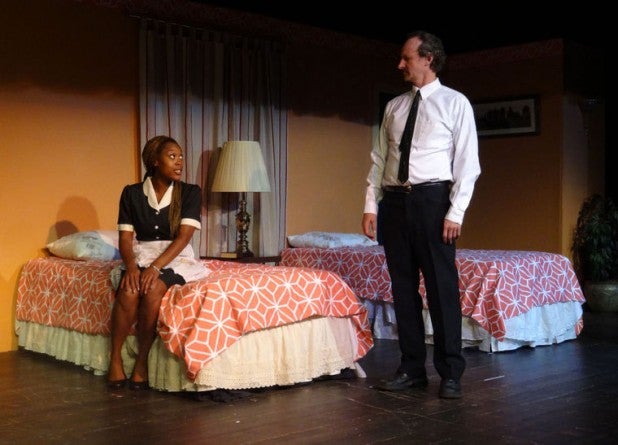 But Hall dismissed the director’s claims. “With a playwright’s intention being dangerously distorted, Oatman’s experiment proved to be a self-serving and disrespectful directing exercise,” she wrote.

Ironically, Hall learned of the Kent State production while in London to urge color-blind casting of her play “Children of Killers,” set during the aftermath of the 1994 Rwandan genocide. However, she noted that casting a black man as King was vital to a “skin experience,” an acknowledgement of the racism of past and present.

“The casting of a white King is committing yet another erasure of the black body,” she wrote. “Sure, it might be in the world of pretend, but it is disrespectful nonetheless, especially to a community that has rare moments of witnessing itself, both creatively and literally, in the world.”

While acknowledging the recent trend of nontraditional casting — including nonwhite actors as the founding fathers in the current Broadway hit “Hamilton” — she argued the approach does not work with a white actor in a historically black role.

“‘Black versions’ are a direct response to the persistent exclusion and lack of roles for black actors working in the dramatic arts, and only further highlight the historically racist programming practices of American theater,” she wote. “‘Nontraditional casting’ puts forth a pervasive misconception: that plays with roles for black protagonists are a) not good enough, b) won’t sell or, worse, c) don’t even exist.”