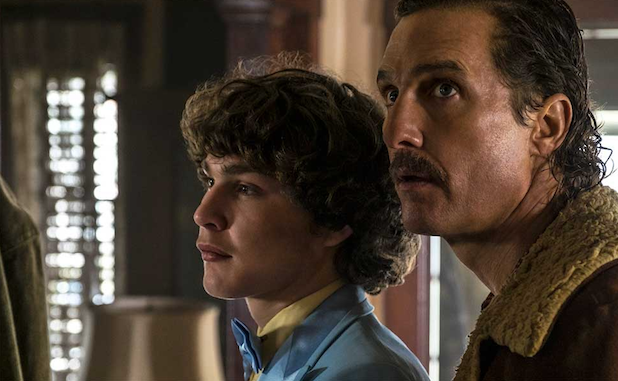 If you didn’t know that the story of “White Boy Rick” was true, you might still be fascinated by this gritty, fast-paced look at a city’s descent into the drug wars of the 1980s through the experience of one unlucky kid, a prelude to the tragic state of Detroit today.

But the story of Rick Wershe, which debuted at the Toronto Film Festival on Friday night, is true. He’s a teenage hustler (played by newcomer Richie Merritt) surviving on the streets of the ghetto. A regular in the neighborhood, he’s pressed into becoming a federal informant by a set of corrupt agents, and soon enough is running his own drug operation — all still as a teen.

Matthew McConaughey plays his father, Rick Sr., a seedy working-class stiff with slicked-back hair who sells guns out of the back of his car to make ends meet. But Rick is also a devoted dad who looks out for Richie, loves and protects him — though not always successfully (Ricky’s sister, played by Bel Powley, is already lost to the family as a crack addict).

The family unit is completed by Bruce Dern as the grandfather living next door.

Ricky is caught between the crooked cops, his downmarket dad, the local drug lords (who school him after an arrest on the difference between doing “white time” and “black time”) and the roiling culture of the street. But Merritt plays his character with a surprising dose of innocence. He’s not a killer and never even considers that route; he sells drugs as his only path out of poverty, even while dragging his sister out of a crack house.

The movie is a convincing prelude to the inner city nightmare of today: Guns abound. Criminals shoot up parties and bars. Kids watching TV in their living rooms end up dead.

Director Yann Demange (“Secret Diary of a Call Girl”) uses darkly lit interiors and a thumping background bass to create the daily tension that accompanies chronic poverty, and not-so-occasional killings of neighbors and friends. It’s to his credit that he lets the scenes play out in a way that feels unforced.

Jennifer Jason Leigh is a welcome presence as one of the corrupt federal agents — she’s half feral, the other half maternal.

But the shocking turn of the story is what happens once Ricky is arrested. It is here that the crushing injustice of the system he cannot change comes home. The final part of the film plays audio of the real-life Rick Wershe, who McConaughey said they spoke to all during the filming.

Said the actor during the Q&A at the Ryerson Theatre: “This story deserved to be told even if it was fiction, which it was not.” Sony will release the film on September 14.