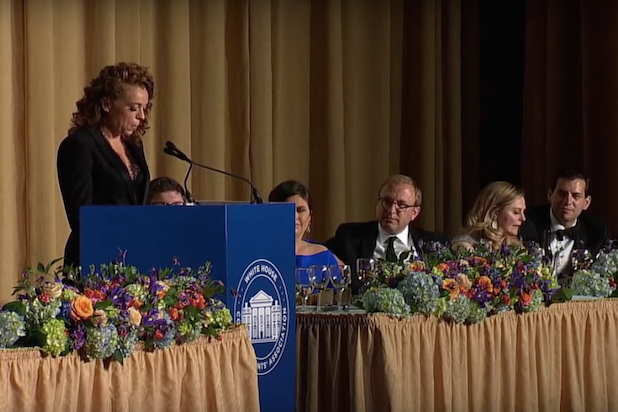 If you didn’t hear already, “Daily Show” comedian Michelle Wolf made a couple jokes this weekend at the White House Correspondents Dinner.

“Last night’s program was meant to offer a unifying message about our common commitment to a vigorous and free press while honoring civility, great reporting and scholarship winners, not to divide people,” said Talev. “Unfortunately the entertainer’s monologue was not in the spirit of that mission.”

With opinions calcified on both sides, it was essentially a no-win situation for Talev. Critics from the left slaughtered her for caving to right wing pressure, while the right declined to come to her defense — or even jeered that the apology was insufficient.

Here’s a few of the many, many opinions offered in response to it.

This is some bullshit right here. And I say that as a journalist for the past 25 years. https://t.co/9Bjcl1DozC

This is most cowardly thing the @whca could possibly write about @michelleisawolf. Every nuanced critique of this administration that she made just flew right over your heads while you kowtowed to keep your White House access. Your organization is a disgrace to journalism.

self-criticism, comrade-citizens, is paramount for any enemy of the people seeking rapprochement with the dear leader https://t.co/QM1yz8vw9p

As an ex-reporter, I would not wipe my ass on any part of the White House Correspondents Association now. Either they stand for open speech and are hosting an event in which some blunt truth can be uttered, or they're hosting an empty circle jerk for the powers that be. https://t.co/OT6QAcpGHs

A free idea for future WHCD. Have journalists do the comedy. You have funny people who can write bits. Use them. I bet it would be great.

This statement from White House Correspondents' Association President @margarettalev is a good first step toward long-overdue reforms of the #WHCD.

To my press corps colleagues: Let's fix this. pic.twitter.com/J7f5Rq2PK5

Here’s a 1st step: Get over yourselves @whca.

But notes that they recognize "great reporting…" they gave CNN an award for their Dossier pee-pee tape coverage last night. #WHCD https://t.co/VjZQsqLkF2

Every year, I see @whca attendees tweeting about how the dinner is about celebrating the First Amendment. That is sanctimonious enough. But this statement reveals anew what nonsense that is. This is performative rubbish, and I hope that next year’s comedian ridicules them for it. https://t.co/tmGcEAP0gm

Hi @whca this is you pic.twitter.com/jzuHlZfpqg

The #WHCA apologizing for Michelle Wolf’s act is so inappropriate and disappointing. https://t.co/g99YAu7JhP