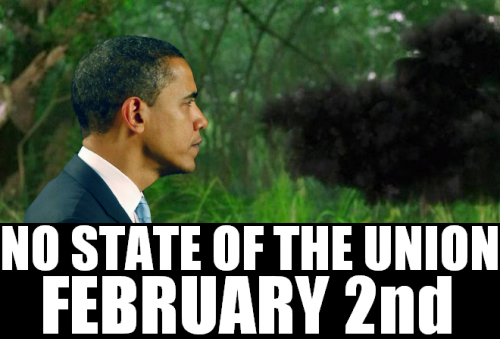 ABC insiders may soon want to tell President Obama to get "Lost."

The White House is finalizing plans for this year’s State of the Union address and is said to be mulling two dates for the speech, according to a person familiar with the matter: Jan. 26 and Feb. 2.

So what’s wrong with that? Well, Jan. 26 would mean an interruption of "American Idol" — though Fox likely planned for that (or would simply tell the White House to take a hike, as it has before).

But Feb. 2? Other than the fact that it’s a holiday (Groundhog Day/TV MoJoe’s birthday), that’s the date ABC months ago staked out for the premiere of the final season of "Lost."

The White House has already royally peeved the broadcast networks by scheduling so many primetime news conferences and speeches during President Obama’s first year in office.

But forcing ABC to move "Lost"? Such a move could make the Tea Party protesters look like flies.

It could make the wrath of Rush and Drudge look pathetic.

Plus, it would be really bad Dharma. (Sorry, couldn’t resist.)

The good news, according to sources, is that the White House hasn’t decided to press the button on the Feb. 2 idea. No doubt ABC has made its displeasure with the date very clear.

After all, it’s not like the network hasn’t been airing promos for the Feb. 2 date every three seconds since November.

"Lost" fans may already be mobilizing to halt this madness. Particularly since logic would suggest ABC would be forced to move back the "Lost" premiere to Feb. 9 — forcing fans to wait another week for answers.

Feel free to register your opinion in the comments below. ‘Cause, you know, that’s why they’re called comments.

UPDATE: The White House backs down.