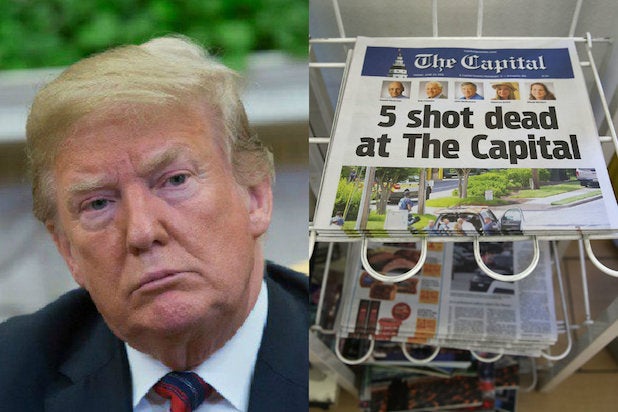 The White House denied a request from Annapolis Mayor Gavin Buckley to have the American flag be lowered to half-mast in remembrance of the victims of the deadly June 28 Capital Gazette shootings.

“The Mayor is extremely disappointed by the denial from the White House of his request to fly the United States flag at half staff in honor of the slain journalists from The Capital Gazette,” a representative from the mayor’s office confirmed to TheWrap. “He sees these murders as an attack on the freedom of the Press as guaranteed by the First Amendment of the United States Constitution.”

The White House has not responded to a request from TheWrap for comment.

Buckley put in a request over the weekend to the White House after Maryland’s governor Larry Hogan ordered the state flag lowered to half-mast from Friday through sunset on Monday, according to The Baltimore Sun. The mayor’s office confirmed that U.S. Representative John Sarbanes called the mayor to inform him that their request had been denied.

Buckley, speaking via the Baltimore Sun on Monday afternoon, said he wanted to keep focus on the event and called the shooting an attack on the press and freedom of speech.

“Obviously, I’m disappointed, you know? … Is there a cutoff for tragedy?” Buckley told the Baltimore Sun. “This was an attack on the press. It was an attack on freedom of speech. It’s just as important as any other tragedy.”

Five people were killed during a shooting at the offices of the Capital Gazette in Annapolis, including the paper’s assistant editor Rob Hiaasen.