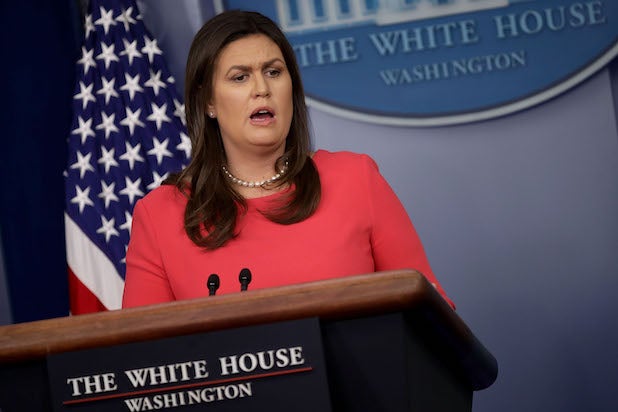 The White House shot back at CNN on Tuesday after the network announced it is suing the Trump administration over their decision to revoke press credentials for White House correspondent Jim Acosta.

“We have been advised that CNN has filed a complaint challenging the suspension of Jim Acosta’s hard pass,” Sarah Huckabee Sanders said. “This is just more grandstanding from CNN and we will vigorously defend against this lawsuit.”

Sanders cited the dozens of other CNN employees who did not have their credentials revoked as proof that the White House was not trying to stifle free speech, but rather taking isolated action against what she described as a frequently troublesome reporter.

“The White House cannot run an orderly and fair press conference when a reporter acts this way, which is neither appropriate nor professional.”

On Tuesday, CNN told the White House  that they would sue the administration over the revocation of Acosta’s press credentials.

“CNN filed a lawsuit against the Trump administration this morning in DC District Court. It demands the return of the White House credentials of CNN’s Chief White House correspondent, Jim Acosta,” said the network in a statement. “The wrongful revocation of these credentials violates CNN and Acosta’s First Amendment rights of freedom of the press and their Fifth Amendment rights to due process.”

“If left unchallenged, the actions of the White House would create a dangerous chilling effect for any journalist who covers out elected officials,” it continued.

The network has retained top legal talent to represent them in the effort including former U.S. Solicitor General Theodore Olson.

“The Supreme Court has held in no uncertain terms that the First Amendment protects ‘robust political debate,’ including ‘speech that is critical of those who hold public office,'” said Olson in a statement of his own. “Mr. Acosta’s press credentials must be restored so that all members of the press know they will remain free to ask tough questions, challenge government officials, and report the business of the nation to the American people.”