More international awards: the 22nd European Film Awards took place on Saturday night in Munich and handed its top honors to "The White Ribbon," director Michael Haneke’s haunting look at a small German town on the eve of World War I.

The film, Germany’s entry in the Oscar foreign-language category, won the European Film 2009, European Director 2009 and European Screenwriter 2009  awards.  Tahar Rahim, the star of the French Oscar entry, "A Prophet," won the European Actor 2009 award for that film, which also took home an award for sound design.

Kate Winslet won the actress award for "The Reader," another film that was released in 2008 in the U.S. but 2009 in Europe. 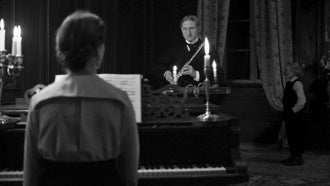 Oscar winner Alberto Iglesias won for his music to the Pedro Almodovar film "Broken Embraces," while the cinematography honor went to Anthony Dod Mantle for his dual work on "Antichrist" and "Slumdog Millionaire," another 2009 European release.

The win should certainly make the Sony Classics releases "The White Ribbon" (right) and to a lesser degree "A Prophet" even harder to ignore in the Oscar race, where volunteers select six films for the shortlist and a blue-ribbon committee adds three more that may have been overlooked by the voters.