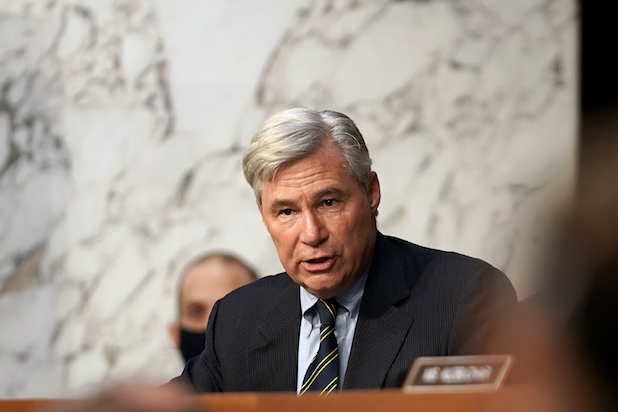 Whitehouse, a Democrat from Rhode Island, made his comments immediately after Mike Lee, a Republican from Utah, addressed the Senate Judiciary Committee in person without wearing a mask. Lee tested positive for COVID-19 ten days ago after attending the White House rose garden event announcing Barrett’s nomination.

“America’s worried about one thing above all else right now and it’s our health. This hearing itself is a microcosm of Trump’s dangerous ineptitude in dealing with the COVID pandemic,” Whitehouse said. “Trump can’t even keep the White House safe. Here, it’s the chairman’s job to see to the committee’s safety and though his words were reassuring, I don’t know who has been tested, who should be tested, who is a danger, what contact tracing has been done on infected and exposed senators and staff. Nothing. The whole thing, just like Trump, is an irresponsible botch.”

Also Read: Joe Scarborough: Republicans 'Don't Give a Damn' About Endangering Others (Video)

Whitehouse went on to call the hearing “slapdash.”

In a statement released by the senator’s office Monday, Lee’s doctor wrote, “Based upon current CDC guidelines, you have met criteria to end COVID-19 isolation for those with mild to moderate disease. Specifically, it has been greater than 10 days since symptom onset, you have had no fever in absence of fever-reducing medication for at least 24 hours, and your other symptoms have improved. The CDC does not recommend repeat SARS-CoV-2 PCR testing if these criteria are met.”

Sen. Tom Tillis, who also tested COVID-positive, appeared via teleconference. Sen. Ted Cruz, who has not tested positive for COVID-19 but quarantined after coming into contact with Lee, also dialed in remotely.

Barrett was nominated by Trump last month following the death of Supreme Court Ruth Bader Ginsburg, whose dying wish has been widely reported to be that the nomination to fill her spot on the court would take place after the upcoming election.

Sheldon Whitehouse, immediately after Mike Lee's statement: "This hearing itself is a microcosm of Trump's dangerous ineptitude of dealing with the covid pandemic. Trump cannot even keep the White House safe… the whole thing, just like Trump, is an irresponsible botch." pic.twitter.com/sOvIX8g4Dz