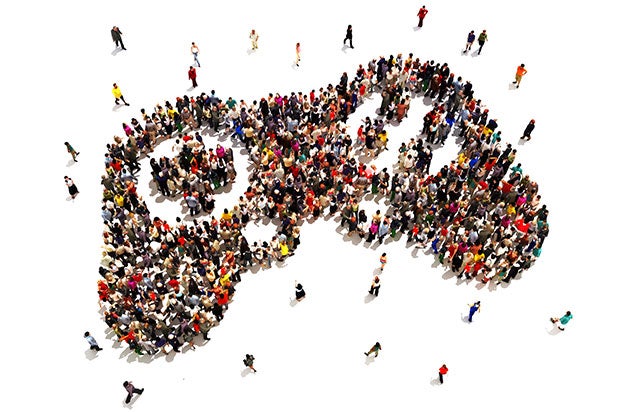 In the U.S., the eSports audience comprises about 12 percent of the general population. Core enthusiasts make up about half of this audience, while the rest are general eSports fans.

These people who watch online video games as a spectator sport are advertising gold. They skew heavily male and are in the 21-35-years-old age group. The figure below shows a detailed breakdown. 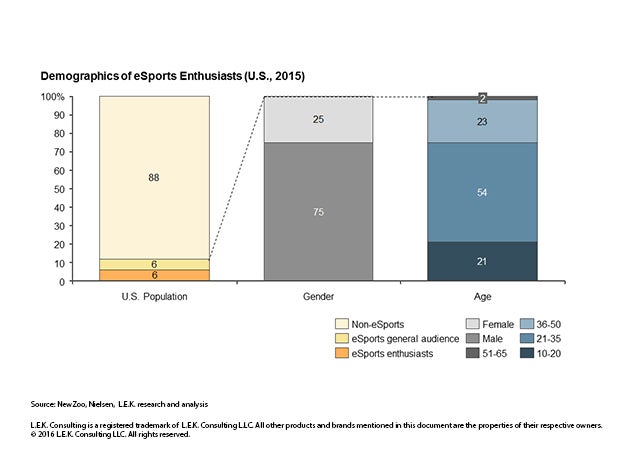 Fans of eSports also have a high affinity for subscription services; about 54 percent report that they subscribe to HBO (compared with roughly 29 percent of the general online population). Interestingly, this audience is also more likely to engage with traditional sports, with approximately 71 percent reporting that they actively participate in team sports versus about 25 percent for the general online population.

This market will grow. Only about a third of the non-eSports fan population is currently aware of eSports, indicating that there is great potential for growth in this customer base.

But for all its attractiveness, the eSports audience is hard to find on traditional media, making advertising a challenge. Young males are notoriously difficult to target as a market. So where can you find these fans?

They’re not watching live TV; Nielsen ratings for millennials have been dropping fast, leaving TV companies wondering where millennial live-TV watchers are going. One answer is that they have been going to Twitch, the largest eSports website in the world, and other eSports streaming providers. U.S. viewers of gaming video content are more likely than non-eSports fans to be cord-cutters or cord-nevers: About 16 percent of this population had broadband Internet and no cable TV subscription in 2014, versus about 7 percent for the overall population.

In fact, eSports streaming sites, which show live feeds of games, have become the go-to destination for eSports fans. Twitch is by far the most popular for American viewers. See the figure below for more details. 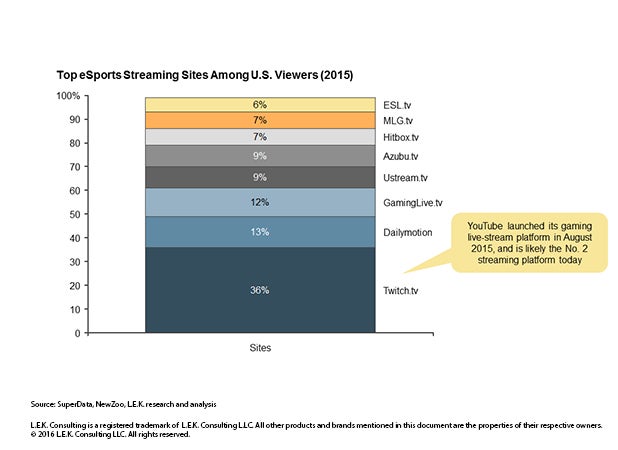 And if you think the only people watching eSports are gamers themselves, think again. Approximately 40 percent of global eSports viewers do not play any of the top franchise games. This suggests that eSports is becoming a spectator sport.

Not all tiles get equal viewership: eSports streaming sites are proving yet again that large franchises drive eyeballs. The majority of hours of gameplay viewed on Twitch skews heavily toward established eSports-related titles such as “League of Legends,” “Counter Strike,” “Dota 2” or “Hearthstone.”

However, some new games do well, too. Activision Blizzard’s “Overwatch” was ranked among the top five most-viewed franchises on Twitch in June 2016, only one month after it launched.

The figure below gives more details on which games are driving traffic. 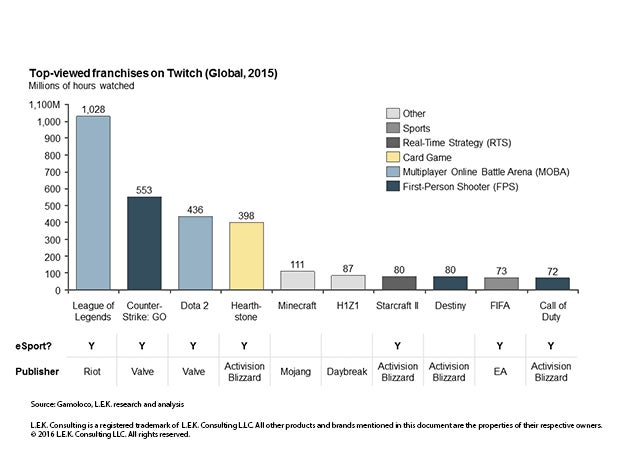 So the eSports audience is not only valuable but reachable, with enthusiasts turning to online platforms to get their fix of live gaming.

In the next post, we’ll take a look at what traditional TV companies are doing to get a piece of the action.

This is Part 3 in a series on eSports by Dan Schechter, Gil Moran and Francesco Di Ianni from L.E.K. Consulting’s Media & Entertainment consulting practice.