So who gets custody of Triumph the Insult Comic Dog in the wake of Conan O’Brien’s divorce from NBC? 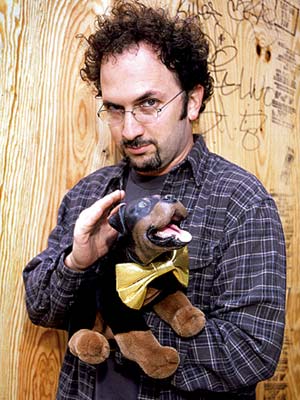 The disposition of the Conan-created bits and characters has been a hot topic of discussion as part of the ugly situation surrounding Jay Leno, O’Brien and NBC.

Not surprisingly, NBC will own any schtick created by O’Brien during his 17 years at the network, people familiar with his exit negotiations said.

O’Brien hosted "Late Night With Conan O’Brien" before taking over "The Tonight Show" in 2004, and he brought a number of skits and bits with him from "Late Night."

That doesn’t mean some schtick couldn’t still pop up on a new show: David Letterman found a way to tweak his Top Ten lists when he moved to CBS, and "the Letterman template" could be followed by O’Brien.

Triumph the Insult Comic Dog may be a question mark. That character is the creation of former "Late Night" head writer Robert Smigel (above), but NBC has always retained ownership of the character. It’s expected Smigel would simply continue getting permission from NBC when he wants to use Triumph — on a new O’Brien show or in any other venue.