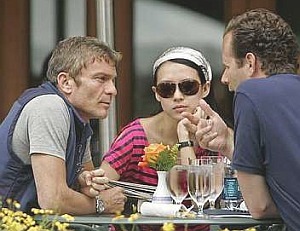 This is starting to bug me. Like many others around Hollywood, I have been hearing about this mystery man, Vivi Nevo, for some time, and been able to find out next to nothing. Here’s what I know: he’s Israeli. He’s engaged to Zhang Ziyi. He’s a staple in the Asian celebrity press which calls him a "venture capitalist," an "investor," and Zhang’s "capitalist boyfriend." He gets invited to Herb Allen’s Sun Valley conference of mogul insiders, and has become a fixture in high-powered media circles: on their yachts, at their charity events, in their social milieu. (He’s a regular in the crowd of Ron Meyer, Rupert Murdoch, Richard Preston, Brian Grazer, Graydon Carter, Jim Wiatt.) But is he a mogul himself? How much money does he have? Where did it come from? What’s he after? Nobody seems to know. Tim Arango took a shot at this mystery in today’s New York Times, but got no closer to the target. After asking a whole lot of bold-faced names, Arango came up with this sort of thing:

You’re asking questions I’ve asked myself many times,” said Nicolas Rachline, who met Mr. Nevo in the late 1980s when both were part of a fashionable New York expatriate crowd that hung out at Le Bilboquet, a French restaurant on the Upper East Side. “What the hell does Vivi do? He seems to be a powerful player in the entertainment industry. How, I don’t know.”

This, to me, raises questions about who is looking out for the media gatekeepers. Can just about anyone with good cheekbones and a friendly affect become best buddies with Richard Parsons, Rupert Murdoch and Ron Perelman? Is all it takes to crack the inner circle of media and cultural power in this country is an ability to remember bar mitzvahs? What does that say about the judgement of these power brokers, and those looking out for their interests? I find it very strange that so many of Nevo’s good friends admit to knowing next to nothing about him. Even the one fact that seems to be touted about him — that Nevo is the single largest shareholder in Time-Warner — turns out to be pure speculation.

There’s something a little strange about all this. It’s worth remembering that there have been many glad-handers and smooth talkers who have ridden into Hollywood and the Hamptons in decades past — Elie Samaha comes to mind, so does Dana Giacchetto — who dazzled otherwise intelligent people, only to have it all end badly. If anyone wants to enlighten me on the subject, including Mr. Nevo himself, I’m all ears.