Who said American lives (or those of transplanted Englishmen) have no second acts?

That’s right, it was F. Scott Fitzgerald, after his most acclaimed novel, “The Great Gatsby.” Just a few years later, he published what he considered his best novel, “Tender Is the Night.” Unfortunately, at the height of the Depression, America was less interested of the travails of the rich. It sank without a trace. Hence his melancholia.

If Scott Fitz had lived only a couple more years, he might have revised his opinion. His posthumous Hollywood novel “The Last Tycoon” won raves and in the ‘70s was made into a movie starring Robert De Niro. 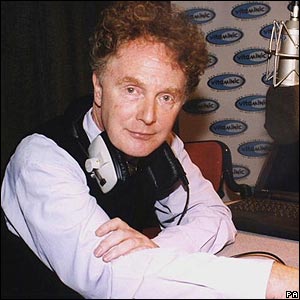 Unfortunately, he didn’t live to see this second act, but two legends of our youth have, and while both have now reached their final acts, they survived long enough to prove F. Scott wrong.

I’m talking, of course, of cultural maestros Malcolm McLaren, who passed in early April, and Dennis Hopper, who is currently battling prostate cancer while institutions like L.A.’s Museum of Contemporary Art are racing to get out Hopper retrospectives before the 73-year-old is no longer with us. Ironically, I know — or knew — both of them.

Let’s deal with McLaren first, though Hopper is by far the more important. McLaren was a true son of the postwar world, born in London a bare six months after victory in Europe. The next decade in England was depressing — it was the era of the playwrights and filmmakers of the "angry young man” school, from John Osborne’s “Look Back in Anger” to Lindsay Anderson’s “The Loneliness of the Long-Distance Runner.” Debt was high, jobs nonexistent, youth “on the dole.” It’s no wonder movies were in black and white … that’s how the world looked.

Finally, young people could take it no more and, following American singers like Elvis Presley and films like “Rebel Without a Cause,” decided to take things into their own hands. The result was the so-called “skiffle” movement of the late ‘50s, which posited that anyone could be a star, leading numerous kids to pick up everything from washboards to upside-down tin drums. Inspired art-school students like John Lennon and Keith Richards picked up guitars and the rest is history — the British Invasion.

While McLaren was too young to participate in skiffle, the lesson that anyone could be a star was not lost when he, too, later headed off to art school. Eventually, he opened a radical clothing store on the Kings Road in London called just SEX.

I got to know him from my own days in punk. As many of you know (“A Beer Run for the Ramones”), when I got to college in New York in the early ‘70s, I made friends with rock manager Marty Thau, who would go on to be the first person to bring the Ramones, Blondie and other seminal punk bands into the studio. But he began his career as a manager with the famous (infamous?) first punk band, the New York Dolls. Few people then — or even today, for that matter — can forget where they were when they first heard “Personality Crisis” or “Looking for a Kiss.” Hailed by everyone from the Village Voice to Newsweek as the new Rolling Stones, the logical successors to David Bowie, the Dolls ultimately never broke out of the downtown New York/West Hollywood glam-rock/punk scene (and Cleveland, where for some reason, they always sold out)! With the exception of Europe.

Though Marty hired me as a roadie for the Dolls in New York, by the time they decided to attack Europe, they’d gone broke financing their second album and could hardly get themselves there, let alone an entourage. After acclaimed shows in England and on Radio Luxembourg, which covered Paris, the staggering bills they’d run up, rampant drug use, etc., forced Marty to throw up his hands in despair.

Into the breach stepped McLaren. He agreed to finish their European tour. Ultimately, he couldn’t save them from themselves and the band broke up. Lead singer David Johansson went on to a solo career as both a musician (“Hot, Hot, Hot”) and actor (“Car 54, Where Are You?”), while three of the other four members died young, two of drug ODs.

Having gotten a taste of rock, however, McLaren went back to London and recruited four layabouts led by a singer named Johnny Lydon (which McLaren changed to Johnny Rotten), wannabe bassist Syd Vicious and the rest.. Who cared, McLaren thought, that none of them could play? Drawing on his experience with the skiffle craze, which saw similarly untalented bands (in the beginning) like the Beatles and Stones break out, he gave Lydon and Co. instruments and ripped T-shirts and renamed them the SEX PISTOLS to promote his store.

Whether or not he knew they would become the international sensation they did — for one album and half a tour, till they, too, broke up — he knew how to get press. Their album was day-glo orange with the words “Never Mind the Bollocks” (or balls, in England) and featured a parody of “God Save the Queen” in which they compared her to, among other things, “a fascist machine” on the 25th anniversary of her inauguration — a stunt for which McLaren did a stint in jail.

But give him this — they completely broke up a then-stagnant rock scene in which the Beatles had broken up, the Stones and Rod Stewart were doing disco (anyone remember “Some Girls” or “Do You Think I’m Sexy”?) and Led Zepplin was on a stairway to financial heaven. As Sex Pistols guitarist Steve Jones told the L.A. Times: “The whole (punk/new wave music) thing probably wouldn’t have taken off without him.”

By the time I was a studio executive in the ‘80s, McLaren had moved to Hollywood, determined to do to film what he’d done to music — turn it on its head. Unfortunately, another young man growing up at the same time in Hollywood had already accomplished that. His name was Dennis Hopper — ironically a teenage star in one of those movies that had influenced McLaren, “Rebel Without a Cause.” A decade earlier, Hopper had already turned the Hollywood system upside down with his outsider hit, “Easy Rider,” which, as I wrote in Los Angeles magazine, “changed everything.”

But we’ll pick up Hopper’s story later; suffice it to say the next time I saw McLaren, CAA sent him to my offices at Columbia to pitch movie ideas. Now, the agent at CAA obviously didn’t know I actually knew McLaren (beyond his reputation). So I decided to have a little fun. When Malcolm came into my corner offices at the studio, I had my surround-sound stereo playing an old acetate of the Dolls’ performance on Radio Luxembourg. It was down low, like elevator music. McLaren, always the salesman, paid little attention and dove into his pitch. After several minutes, however (me quietly smirking), he got uncomfortable. Finally, he stopped and asked me, point blank, “What is that you’re playing?” “Oh,” I mused, “nothing much — just the last recorded performance of the New York Dolls.”

I won’t say he keeled over, but it gave pause … and after a minute, he’d totally forgotten what he was there for and we began bonding over lost years and musical opportunities. I only saw him once more before he faded from the scene, at dinner at an English director’s house. But I’ll never forget him — and that one glorious afternoon when he finally met someone who knew more about him than he, publicity hound that he was, did!