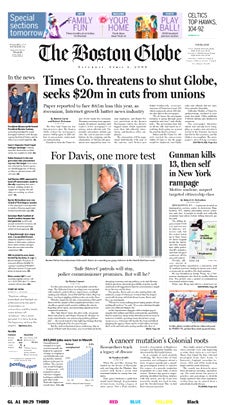 After months of scuffling — and threatening to shut the paper down — the New York Times Co. said for the first time on Thursday that it is seeking a sale of the Boston Globe.

The admission came in the form of a disclosure in a regulatory filing to the S.E.C., and was first reported by the Globe itself. Goldman, Sachs & Co. is handling the sale discussions.

The paper’s publisher, P. Steven Ainsley, quickly fired off a memo to employees to assuage their fears: "I want to let you know that the top executives of The New York Times Company hold the employees of the New England Media Group in the highest regard, and are proud of our journalistic quality and business acumen. The exploration of a potential sale does not reflect on their confidence in our abilities or professionalism."

He continued: "We are making considerable progress in improving our financial position. We continue to be an industry leader in journalism. We are expanding our already excellent online capabilities and features. Our sales and marketing teams continue find new ways to capture high shares of advertiser and consumer revenues. In other words, we are staying true to our mission and can’t allow any potential change in ownership to distract us."

Just who would buy the Globe at a time when the newspaper industry is, to put it kindly, bloodied, battered and beaten is a question for the ages.

Already this year, the Rocky Mountain News and Seattle Post-Intelligencer were shuttered when their parent companies — E. W. Scripps  and Hearst, respectively — couldn’t find buyers for them.

Two groups have reportedly expressed interest in buying the Globe: Stephen G. Pagliuca, a co-owner of the Boston Celtics, executive at Bain Capital and civic-minded Bostonian; and Stephen E. Taylor, whose family sold the Globe to the Times. “Both are the perfect profile for this type of deal,” said Reed Phillips, partner at DeSilva + Phillips, a media banking firm.

I’ve asked a number of M+A executives if they know of any other suitors; they did not.

No chance of recouping that investment now.