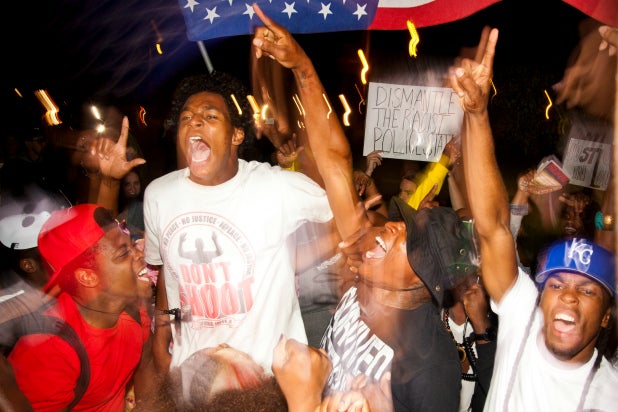 Ferguson, Missouri, is now a kind of geopolitical shorthand for the shocking, tragic death of black teenager Michael Brown, Jr. at the hands of white cop Darren Wilson on August 9, 2014. But the new documentary “Whose Streets?” would also like to make perfectly clear that Ferguson is more, that it also represents what arose from Brown’s killing: a unified activism, and a renewed purpose from a targeted community.

Sabaah Folayan and Damon Davis’ film takes us into the charged, mournful and even hopeful days, weeks and months after Brown was shot, told from the perspective of the citizens who needed answers, got mostly more questions and heartache, and responded with collective strength.

It uses an immediate, you-are-there format that combines everything from vérité filmmaking and interviews to cellphone-captured footage and tweets as act breaks to offer a experience-driven corrective to the mainstream, sensationalist-slanted news coverage through which you initially, invariably, absorbed the events of Ferguson. In that respect, what “Whose Streets?” vitally offers — despite its birth in sorrow and its many war-zone-like stretches — is a tale of alertness and awakening.

Simply by offering up images and scenes in the streets of Ferguson in the wake of Brown’s shooting without news graphics framing or a chyron using the word “riot” — where peaceful vigils were held, and residents gathered to talk, cry, laugh and organize during the day — the movie does its necessary job. It makes the impact of the eventual nighttime encroachment of a militarized police force like something out of a nightmarish battle film: it feels like an invasion.

Folayan and Davis connect the dots for us: when your sense of shattered peace, confusion and consuming grief is assaulted by looming tanks, gripped M-16s and canisters of god-knows-what, it’d be difficult to look at any show of authority as protective rather than knee-jerk hostile.

As the movie chronicles the aftermath (the trickle of information, the imposed curfew, the piling-on of injustices pertaining to the “investigation”), we also get a protest narrative led by a handful of figures on whom the filmmakers focus. We meet 25-year-old nursing student Brittany, a lesbian mother who turns full-time activist in the wake of Brown’s killing; she intends to pass on her passion for democracy to her daughter, and eventually she leads a highway-stopping action that threatens to land her in prison.

Another parent, David, whose apartment was mere feet from the killing, is a member of the longstanding watchdog group Copwatch. He takes charge of guarding Michael Brown’s memorial from repeated attempts to vandalize it — at one point, it’s set ablaze, and the fire department’s response is dishearteningly slow — or to remove it entirely. Kayla, a young woman who also found her civil rights calling after August 9, makes the sobering point that to her, the word “violence” means harm to a person and not, as utilized in media reports on the Ferguson unrest, a burning convenience store.

You can debate the distinction, but it makes you wonder: was the word “violence” ever used to describe what happened to Michael Brown, Jr? Does destroyed property get more coverage than destroyed bodies?

Also Read: Larry Wilmore on Ferguson Anniversary: 'Time Flies When You're in a Constant Panic About Getting Shot by the Cops'

Along the way, there are many moments that singe the soul or shake up your consciousness. An activist in his home displays the debris of what he calls “chemical warfare” deployed on US soil: rubber bullets and spent smoke and tear gas canisters he’s found on the street. The eyes of an African-American policewoman enduring in-your-face protesters as she stands in a line of blue; would she say something if she could? A city council meeting at which, after a white male resident talks of the recent safety concerns, a black citizen calmly tries to put it in perspective: white people’s two months of fearfulness versus his community’s two decades of it. Or put another way, tear gas canisters have nothing on the volume of tears already shed by the neglected and mistreated over so many generations.

“Whose Streets?” bears the unruliness of a pavement-pounding civic action; it’s not always organized, but it has a persistent force. Its base angle is from the ground up, its default tone is outrage, and its go-to sound is chanting. Even-handedness or viewpoint equivalency isn’t on its mind: outside of public appearances by law enforcement (either at press conferences or in riot gear), the focus is on the people, and that’s what gives the movie its special power.

Even as the familiar machinery of oppression and injustice tries to drown them out, the mobilized, impassioned citizens and their allies valiantly grapple with an opportunity to force change and to seize a moment alive with possibility.