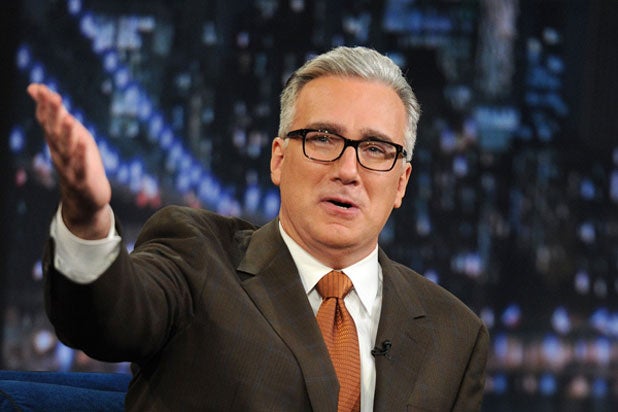 Keith Olbermann’s final moments as an MSNBC anchor in 2011 foreshadowed the network’s fate that followed.

“Chris Hayes, filling in for Rachel Maddow on the Rachel Maddow show is next,” Olbermann said as he signed off with his patented toss of the scripts into the camera.

After quick stints for Lawrence O’Donnell and Ed Schultz in the 8 p.m. ET hour following Olbermann’s abrupt exit, the wonkish Hayes was slotted into the coveted timeslot in 2013 as network president Phil Griffin bet on smarts over sensational–nuance over nutty.

Two years later, Olbermann is now twice fired: from Current TV and ESPN, the latter his second departure from the worldwide leader. Meanwhile Hayes’ continuing struggles in primetime casts the biggest shadow over a free-falling MSNBC.

That has naturally sparked speculation on whether a return to MSNBC of the thunderbolt that is Keith Olbermann can translate into the ratings jolt the network so desperately needs.

“It’s a very tense line between what’s best for the ratings and what’s best for morale–Olbermann helps one but most definitely hurts the other,” one MSNBC insider told TheWrap about his potential return. MSNBC declined to comment to TheWrap on the subject.

The ratings point is a given; Olbermann was the highest-rated anchor in MSNBC history. His blistering offensive against President George W. Bush at the height of the Iraq War helped brand the network for the first time and brought in a surge of viewers who’d finally found their voice of reason.

But morale among staffers was a big problem during his tenure, as Olbermann was notoriously difficult to work with. According to various insiders, things got so bad, producers communicated with him by writing notes and inserting them into a box outside his office.

“I don’t think it’s likely to happen because MSNBC’s biggest problem is it can not control its stars,” NPR TV critic Eric Deggans told TheWrap. “(After) what they went through with Ann Curry and Matt Lauer and Brian Williams, the last thing NBC News needs is to hire someone who’s unpredictable, who hates authority and who constantly bucks against his bosses. They would be basically planting a time bomb at MSNBC assuring another debacle in two or three years.”

Deggans acknowledged Olbermann would help in the short-term, but his return would hurt in the long-term, particularly setting up a battle between Olbermann and a new MSNBC face: Brian Williams.

“They’ve got Brian Williams who has to rebuild his credibility, now he has to butt heads with Keith Olbermann to be the biggest guy at MSNBC–really?” Deggans noted.

“It is unlikely he would return to MSNBC–he is expensive and difficult, and burned a lot of bridges,” he told TheWrap. But there are other factors that come into play that pour buckets of cold water on a new Olbermann and MSNBC romance.

Olbermann’s high point at the network came in large part thanks to having a clear target in the Republican administration. Olbermann’s “special comment” segment, long, sometimes 10-plus minute tirades against George W. Bush, Dick Cheney, Donald Rumsfeld and the rest of the Bush braintrust sparked watercooler chatter.

In 2015, who would be his permanent foil? Like the rest of the media, he’d have his fun with Donald Trump, Ted Cruz, Ben Carson and others in the growing Republican presidential field. But those figures are temporary cogs in the news cycle machine–even Trump.

Realistically, Olbermann would be supporting Democratic candidates like Bernie Sanders and Hillary Clinton while trashing the aforementioned. But with an increasingly more liberal country, what attracts viewers: rallying around the liberal troops or railing against an unpopular Republican president?

And then there is MSNBC overall. For a year now, we’ve reported on the network’s pivot to hard news, aiming to establish itself as a serious news channel as opposed to the liberal opposite of Fox News.

An Olbermann return essentially neuters that campaign, bringing the network right back to where it was when he helmed MSNBC primetime: a liberal talkfest with some news during the day.

For Olbermann’s part, it seems he’d be interested, complimenting some of MSNBC’s biggest names back in March.

“Do not be afraid to make good television. And in Rachel [Maddow], Phil Griffin, and Andy Lack, they’ve got three people in place who’ve already done that there,” he told the AP.

The final cards lie in Lack’s hands–abandon the harder news mission for the even harder mission: a return to respectable ratings.

If Lack, who reportedly had a good relationship with Olbermann when the two worked at NBC/MSNBC at the same time, wants ratings–and a brand–that lasts past elections and breaking news, Keith Olbermann 2.0 isn’t the answer.