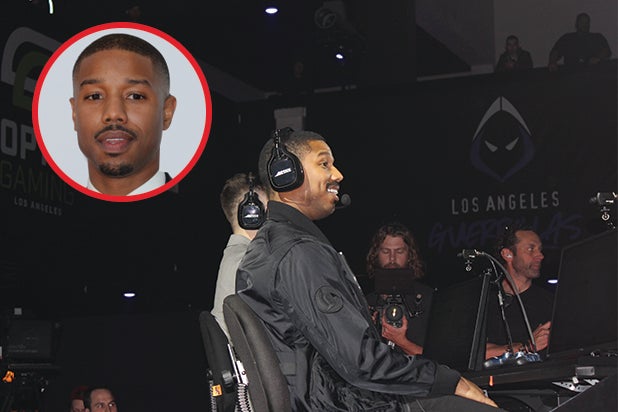 Michael B. Jordan competes at the Call of Duty Home Series in Los Angeles.

Why Actor Michael B. Jordan Is Betting Big on Esports

“There’s probably so many other gamers out there that are artists or celebrities that are playing,” Jordan tells TheWrap

Michael B. Jordan is known for his genre-spanning film and TV career, but now the SAG award-winning actor is joining the world of video gaming.

On Sunday, Jordan participated in a match at the “Call of Duty League Home Series” event in Downtown LA. The day was dominated by back-to-back esports competitions, with a break for a star-studded friendly exhibition match. Jordan played alongside esports broadcaster Miles Ross, and the two competed against Los Angeles Rams running back Todd Gurley and actor Andrew Bachelor, better known as King Bach.

Jordan and Ross’ quick reflexes ensured they won the match 5-0.

Jordan told TheWrap he’s been a gamer since around 1997, when the first-person shooter based on the James Bond film “GoldenEye” was released for the  Nintendo 64.

“Going back to ‘Doom’ on the PC in computer science class, I think from there on forward the first-person shooter has always been a part of my life,” Jordan said, adding he’s played “Call of Duty” since the first release by game publisher Activision in 2003.

A lifelong passion for gaming prompted Jordan, who grew up in Newark, New Jersey, to invest in a New York-based “Call of Duty” League team, the NYC Subliners. The esports team is owned and operated by Andbox, which Jordan became involved with late last year.

“I found out they were getting a ‘Call of Duty’ league team, and I was like, man, I really want to be involved in this however I could,” Jordan said. “Being from the east coast and the New York area, it was perfect. Why not play for the home team?”

Jordan added that he feels he got into esports at the right time, as it is continuing to grow and become more popular. Live events like the “Call of Duty Home Series” are common in esports, and feature two teams battling it out on a live stage while spectators follow the action on close-up screens around the arena.

“It’s brand new. This is really the first year for us of introducing it to the world. This is why we really want to make sure it’s received well, and we give a good strong first impression,” Jordan said of the Call of Duty League, which was launched by Activision Blizzard Jan. 24. “There’s no doubt in my mind that for years to come this league is going to continue to grow and grow, and it’s cool to be here from day one.”

When asked what his favorite games are besides “Call of Duty,” Jordan said he’s currently playing the “Uncharted” series from Sony Interactive Entertainment, and the new “Marvel’s Spider-Man” game from Insomniac Games. He’s also a lifelong fan of EA Games’ “NBA 2K” series, and has played since the first edition.

Stigma has often surrounded the gaming industry, and skeptics often describe gamers as “sitting in the basement of the house in pajamas playing video games all day,” Jordan said.

But he thinks successful esports leagues and games that are engaging to watch are key to dismantling that negative stereotype.

“I think people are going to start to find they like (Call of Duty) even more than they thought they would,” Jordan said. “I find friends of mine that don’t even play the game just like watching me play.”

When asked about his upcoming untitled film with director David O. Russell, Jordan said he was unable to provide more details, but said he was “excited” to be a part of it.

“There’s probably so many other gamers out there that are artists or celebrities that are playing and love these games that you’re going to see crawl out of the shadows,” Jordan said. “I think that will inspire a whole new demographic of people that look at gaming differently.”

Scott Rudin to ‘Step Back’ From Broadway Productions, Apologizes for ‘Pain My Behavior Caused’