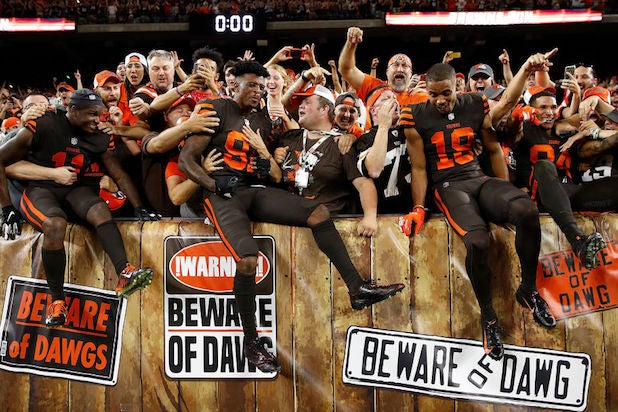 Browns celebrate with fans after a 21-17 win over the New York Jets on Sept. 20 in Cleveland, Ohio

TheWrap has partnered with Canvs, the emotion measurement AI company, for a weekly look at some of the characters and personalities that have TV viewers the most worked up on social media. The data below covers Sept. 19-25 and is drawn from the most emotionally reacted-to television programs, including broadcast, cable, streaming and PPV.

A new quarterback for the Cleveland Browns, a golf icon and a “This Is Us” star had viewers talking passionately on social media over the past seven days.

One of the most emotionally reacted-to programs of the period measured was the NFL game between the New York Jets and the Cleveland Browns, which was broadcast on NFL Network and generated an impressive 173,293 Emotional Reactions (ERs). The Browns, and specifically their rookie quarterback Baker Mayfield, really revved people up emotionally as they made a big comeback to snag their first win in almost two years.

What a game and what a night. Baker Mayfield is the truth. Can't wait till my #6 Browns jersey comes in

NBC’s broadcast of the final round of the 2018 PGA Tour Championship sparked 104,156 ERs, with Tiger Woods driving the bulk of the emotional conversation. It marked the 80th PGA Tour win for the golf legend, and his first since having multiple back surgeries. Fans, commentators and pro golfers chimed in while watching the action unfold, then celebrated alongside the champion.

This is incredible to watch. So awesome.

To answer the question, yes Tiger Woods is back.

He’s been back. But you can now stop asking.

I never dreamed @TigerWoods could come back and swing the way he has, after surgery. I think you could argue he’s swinging better than he has ever in his life. He has played fantastically!

I just witnessed the greatest sporting spectacle in my life. Tiger Woods with the Epic comeback. GOAT

A new season of NBC’s “This Is Us” just kicked off, with much of the emotional conversation during the premiere (23,102 ERs) being driven by Beth Pearson (portrayed by Susan Kelechi Watson). Viewers loved her storyline, with many commenting about her marriage to Randall as well as special moments between Beth and the show’s characters, while other fans were loving the acting itself from Watson.

This dual conversation is the best: a cute convo with the girls and a hilarious argument with Beth and Zoe #ThisIsUs

I love Beth. She's so funny and dynamic. #ThisIsUs

Randall and Beth are great and all, but I could watch hours and hours of Kevin and Beth. (Basically Beth is the best.)

Beth is the best. @skelechiwatson is magnificent #ThisIsUs