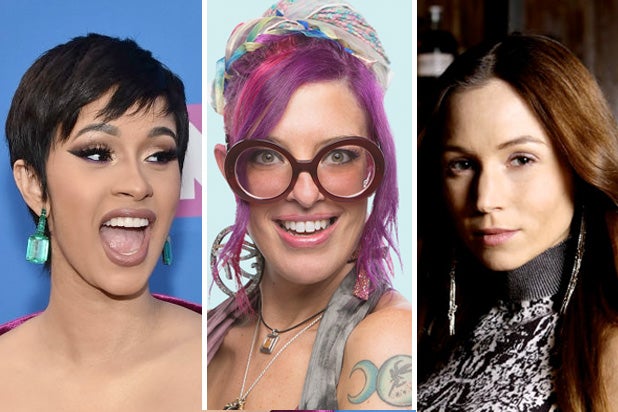 The Wrap has partnered with Canvs, the emotion measurement AI company, for a weekly look at some of the characters and personalities that have TV viewers the most worked up on social media.

The data below covers Aug. 15-21 and is drawn from the most emotionally reacted-to television programs, including broadcast, cable, streaming and PPV.

The 2018 MTV Video Music Awards prompted an impressive 544,306 Emotional Reactions (ERs) with rapper Cardi B driving much of the emotional conversation during the night.

In her first major appearance since giving birth earlier this year, the rapper opened the show and then proceeded to win three awards: Best New Artist, Song of the Summer for “I Like It” and Best Collaboration for “Dinero” with Jennifer Lopez and DJ Khaled.

As usually happens with award shows, fan comments were mixed — many applauded her looks and performance on stage, while others simple sent messages of love or hate.

Can someone send me a good quality pic of Cardi B’s makeup from the VMAs please? I really want to re-create her makeup it looks stunning

Hands down every other celebrity needs to fire their stylist because Cardi B is the only one killing it on the red carpet stunning @IAMCARDlB #bless @TRL @vmas @etnow pic.twitter.com/09VkJZAVvW

A recent episode of “Big Brother” on CBS resulted in 24,795 ERs, with contestant Angie “Rockstar” Lantry driving a lot of emotional discussion, especially when she ended up being the one evicted from the house.

Comments about everything from her looks to her attitude poured in during the episode, with more than a few people admitting they were glad to see her go, while others proclaimed their love.

I love you Rockstar. Thank you for being the kind, loving, warm, hilarious, real, entertaining, and open-hearted houseguest on #BB20. #RockOn???? pic.twitter.com/Ppt9z5UdXL

#bigbrother I liked Rockstar in the beginning but then she just got mean with her mouth! Happy to see her go now!

Ive waited for rockstar to be evicted since literally day 1!! Honey you ain’t bad or cute, have fun in jury!! #bb20

The character driving the bulk of emotional discussion was Waverly Earp (portrayed by Dominique Provost-Chalkley), a member of the Black Badge Division and sister of main character Wynonna.

In this episode, the girls’ mother (Megan Follows) is certain that Waverly is being stalked by a demon. Fans loved seeing the three women act on screen together, and sent messages of encouragement to Waverly to stay strong.

The trio of Wynonna, Waverly and Mamma – I could NOT look away. Seeing these three incredible actresses share the screen… just WOW! Thank you @MelanieScrofano @DominiqueP_C @Meg_Follows #WynonnaEarp

I really want to give Waverly a big hug. None of this is your fault, but you’re being made to feel horrible about it. ☹️ #WynonnaEarp

1. Waverly is strong.
2. Demons are bad.
3.The team may be tempted, but they won’t completely fall. #WynonnaEarp

Jenner leads the pack with $1 million dollars per update

Ever wonder just how much influence your favorite influencers have on Instagram? Instagram post-scheduling tool Hopper HQ has compiled a list, reporting how much celebrities charge for each post they put forth on the social app owned by Facebook. The numbers range from a few thousand to $1 million dollars.