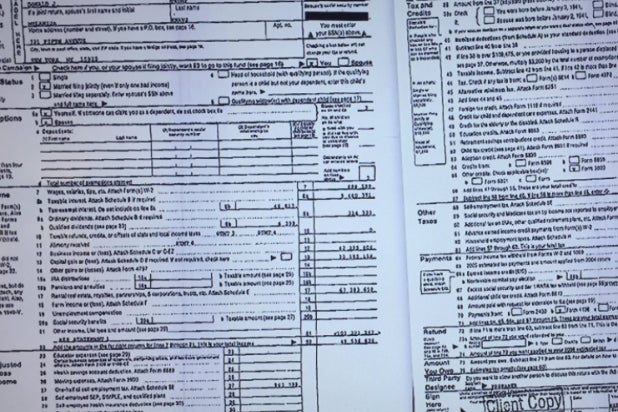 Why does the leaked Donald Trump tax return that reporter David Cay Johnston unveiled on “The Rachel Maddow Show” include a stamp that says “Client Copy”?

We don’t know the answer, but we do know the question will fuel a theory — offered up by Johnston on the air — that Trump or one of his representatives may have leaked the return. Johnston told Maddow the document — a long-form 1040 form from 2005 — appeared in his mailbox.

A screen shot by Bloomberg News reporter Sahil Kapur shows a stamp on the bottom left corner of page 2 of the two-page form that reads “Client Copy.”

Here's a photo of the Trump tax returns that @maddow just displayed.

The stamp means either that Trump shared the copy, or that an unidentified leaker had access to it, New York based CPA Michael Markiewicz told TheWrap.

“This is Donald’s copy. Any time there is a client copy, that goes to client, it’s for them to keep,” he said, adding the slight hedge: “I’d say 99 of a hundred times that is true. If it says ‘client copy’ it’s the client’s copy.”

While some accountants keep a copy of clients’ tax returns on file, Markiewicz said those copies usually wouldn’t be stamped.

“It’s very likely that the person or persons who leaked it is either Trump himself or someone close to him,” he said.  “Otherwise who would have the client copy?”

The White House said in a statement that it is “totally illegal to steal and publish tax returns.”

Johnston, a Pulitzer Prize winner and author of the book “The Making of Donald Trump,” explained that Trump has a habit of leaking things that are beneficial to him.

“It’s entirely possible that Donald sent this to me,” Johnston told Maddow. “Donald Trump has over the years leaked all sorts of things. The very sleazy girl-on-girl pictures of the first lady in the New York Post may have come from Donald. The front pages of the state tax returns… that were sent to the New York Times… last fall may have come from Donald. Donald has a long history of leaking material about himself when he thinks it’s in his interest.”

So why would it be in Trump’s interest to release his own return, which he has previously refused to make public?

One could argue that the the two-page document from Trump’s 2005 federal tax return reflects well on him because it shows that he paid $38 million in taxes on $150 million in earnings. That shows both that Trump paid taxes — something his critics have accused him of avoiding — and that he had a good year in 2005.

There may also be another way the return’s release benefitted Trump: It distracted the news media from Republicans’ struggles to dismantle Obamacare.

The Congressional Budget Office just released an estimate that the current Republican plan would reduce the number of insured Americans by 24 million — a number sure to include many Trump voters.

“This is now the focus, not health care,” New York Times reporter Maggie Haberman said of the tax return.

And then the White House quickly puts out statement confirming it; this is now focus, not health care https://t.co/uhIjhml3mp

For decades, past presidents have turned over their tax returns in the spirit of transparency with the American people. But Trump has deeper and more complex business ties than any past president.

Trump’s refusal to release his tax information has made it an elusive white whale for many journalists. The New York Times reported last year that it had obtained three pages from Trump’s 1995 state returns, which showed that he lost $916 million that year. Tax experts said the loss would have allowed him to avoid paying personal income taxes for almost two decades.