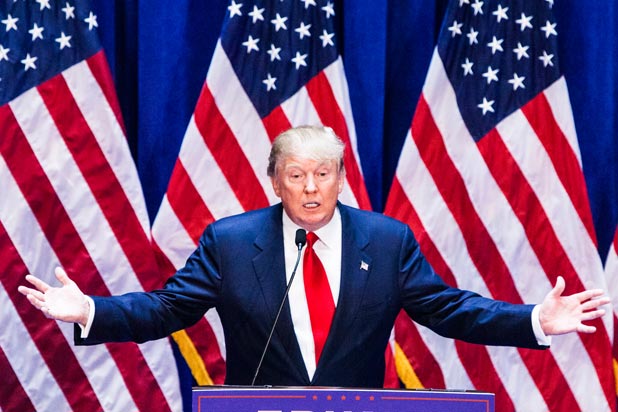 They say all good things must come to an end, but Donald Trump doesn’t care.

In a typically slow summer news cycle, Trump has been the gift that keeps giving, lending TV news producers and website editors a steady diet of content, often out front as the leading story across platforms.

“I keep whining and whining until I win,” the GOP frontrunner said Monday on CNN, a classic example of comments which would doom Hillary Clinton or Jeb Bush, yet propels Trump to even further stardom in this upside-down campaign.

Also Read: Donald Trump Scolds Matt Lauer: 'You're the Media' and 'Misrepresent Just Like Everyone Else' (Video)

He’s also ginned up the media to win: between Sunday, August 2nd and Tuesday, August 12th, the Donald appeared 22 times between Bloomberg, CNN, Fox News, MSNBC, CBS, NBC and ABC. That’s not even counting the gargantuan amount of earned media he’s received on said networks, serving as the center of hours worth of TV and digital chatter.

“Reporters keep saying they are tired of writing about Trump but yet…they continue to write about Trump,” Democratic strategist and frequent MSNBC guest Tara Dowdell told TheWrap. “Trump’s supporters are not going to get tired of him; many of them I suspect are longtime fans,” she continued, noting the real estate mogul has been a media figure since the 1980s.

Trump fatigue will hit people who aren’t already supporting him, she said, with the more looming cloud over the Donald’s campaign being an overemphasis on media and lack of attention to building a real field operation in key states.

Bill Burton, who helped elect Barack Obama, serving as his national press secretary from 2007-2008, disagreed, arguing Trump doesn’t risk overexposure, as that’s really the point of running for office. But when the gusts from the Trump tornado clear, it will be the GOP left cleaning up the wreckage.

“Since he will never be the Republican nominee nor the president of the United States, the thing he ought to worry about is his destruction of the Republican brand,” he concluded.

It’s not just the sheer magnitude of media attention the Donald is getting that will either propel him to the Republican nomination or doom him to the firing line like his “Apprentice” contestants.

Trump’s two-month staying power has muted his challengers across political aisles. Even Bernie Sanders–who’s received larger crowds than Trump–has been bumped to the back pages of the pundit-palooza; Jeb Bush, the assumed GOP nominee on sheer fundraising alone, has been all-but relegated to relic of the past status.

“In terms of electability, Trump eventually risks overexposure and the public will begin to tire of him,” veteran journalist and University of Maryland professor Mark Feldstein told TheWrap. “But the key two qualifiers here are the words eventually and electability.”

That eventually comes later for Trump than for traditional candidates since he’s simply more entertaining than any other presidential candidate in memory, Feldstein said.

“He certainly hasn’t acted like anything like a traditional presidential candidate so far; his deliberately incendiary comments make third-party candidates like H. Ross Perot or George Wallace seem like paragons of orthodoxy by comparison.”

Whether Trump joins Perot and Wallace on the losing end of political history isn’t the point. How loud his echo rings in the Republican Party for the next decade is.