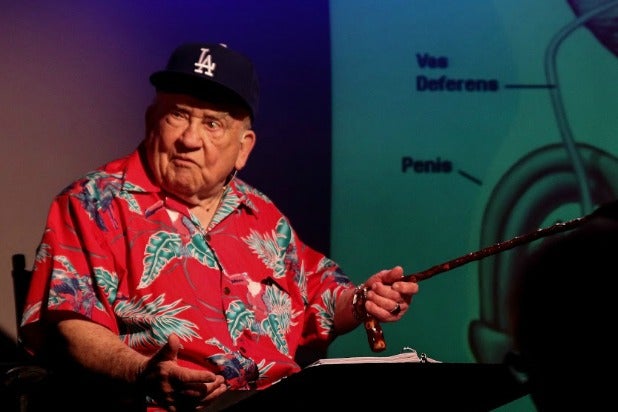 A show about prostate problems that plague older men does not strike one as a comical subject. But when lines about male issues are being delivered out of the mouth of the quintessential curmudgeon, an 86-year-old Ed Asner, this delicate topic is gut-wrenching humorous.

Asner is appearing around the country in a new one-man show, “A Man and His Prostate,” that recently debuted in mid January to sold out crowds at the Metropolitan Room in New York City. Written and created by Emmy and Golden Globe winner Ed. Weinberger, this hilarious and painful story of one man’s woes with a prostate crisis while on an Italian vacation captures the embarrassment of prostate ills and explains the male anatomy like no play has ever done.

Playing to a packed house, a pleasantly surprising mix of young and old audience members, at the Metropolitan Room affords an intimate atmosphere that the delicate subject matter requires. Asner, dressed in a LA hat and a Hawaiian shirt, handles the lines by reading them from a script. He starts out with a grunt and a funny Jewish joke that immediately sets the audience laughing. Then Asner kibitzes, kvetches and admits the axiom that “Jews worry about their health.”

The play is not only funny but alerts the audience to the rarely discussed issues of men’s prostate medical issues. With a sheet staged behind Asner, he lays out an anatomy lesson that borders on too much information while being an informative journey through the male malaise that is very revealing both literally and figuratively.

Weinberger wrote the play based on his own experience of a painful prostate episode while on a side trip to Florence from his Italian cruise ship. Having physical discomfort was obviously compounded by being in a strange land. Asner plays the suffering writer with vigor.

The play gets funny and delicate when Asner spares no subject as we hear the very graphic symptoms of the erect and semi erect penis. And no pot is left unturned as he complains about pissing nine times.

Asner was so convincing as the sufferer of prostate blockage that several audience members asked him afterward if he has recovered from the episode. And for us audience members: One still hurts from all the belly laughs watching the show.

One cannot help thinking that what “The Vagina Monologues” did for women’s issues, Weinberger, who used to write for Johnny Carson, Dean Martin, Bill Cosby and “The Mary Tyler Moore Show,” has done for older men.

Asner plans on taking the play on the road to further expose the secret life of men’s prostate illnesses. We cannot imagine a better actor to pull off such a painful and delicate subject.