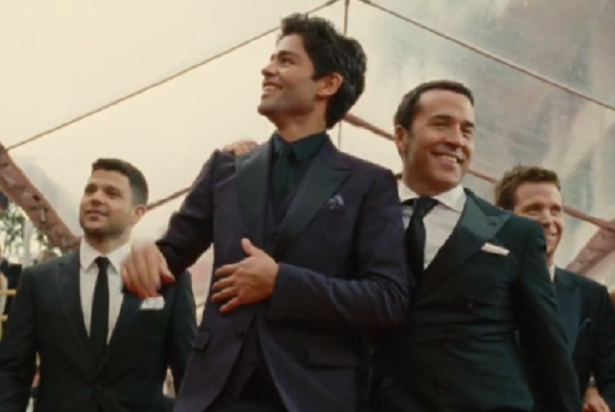 Relationships make all the difference in Hollywood, and they’re at the heart of “Entourage,” the Warner Bros. movie version of the hit HBO series that arrives in theaters Wednesday.

But they may not be enough to push the film to make moviegoers buddy up to this big-screen bromance.

Second, the posse of movie star Vincent Chase (Adrian Grenier) may have become passé in the four years since the show went off the air. At its peak, the HBO series drew around 8 million viewers, but the following was heavily weighted to the far coasts. The series flopped in syndication.

Compared to some of summer’s sequels and superhero fare, the buzz on the movie has been negligible. Analysts are projecting a soft $12-$15 million opening over its first five days, though a late surge in ticket sales at Fandango Tuesday night suggests things might improve.

Third, the box office track record for insider Hollywood tales has been dismal.

In the past five years, Hollywood has released 18 movies about itself. But only three — “Argo,” “Tropic Thunder” and “This Is The End” — have made more than $100 million domestically, according to Box Office Mojo. And there is hardly blockbuster potential because they don’t play well in foreign countries: not one has made $100 million overseas.

So why is Warner Bros. taking a big-screen bet on an “Entourage” movie? It comes back to relationships.

Stephen Levinson and Mark Wahlberg, who executive produced the series and are producers on the film, are longtime friends and business partners. The production side of Levinson’s Leverage Management company took off when “Entourage” and “Boardwalk Empire” did on HBO. Levinson currently manages Grenier, Ferrara and Wahlberg, whose films for Warner Bros. include “The Perfect Storm” and 2007 Best Picture Oscar winner “The Departed.”

But the most significant relationship at play here may be the one between HBO and Warner Bros., both owned by Time Warner. The synergistic strategy paid off with HBO’s “Sex and the City,” which became a smash Warner Bros. movie and spawned a sequel. So that making an “Entourage” film was an easy call, particularly at a modest $27 million budget with a boost from California production tax credits.

Also Read: 'Entourage' Review: Jeremy Piven and the Boys Are Back, and They're Obnoxious

“Warner Bros. rolls out a lot of movies, so they can afford to make some like ‘Hot Pursuit’ and ‘Entourage,'” Exhibitor Relations analyst Jeff Bock told TheWrap. “They don’t cost a lot, and having others like ‘Mad Max’ and ‘San Andreas’ gives them the option of making some that are intended to build relationships.”

Sounding a bit like Jeremy Piven‘s super-agent turned studio boss Ari Gold in “Entourage,” Bock added, “They’re in the business of being in business in the future.”