If you need convincing that “Fauda” should be your next binge-worthy Netflix offering, consider this: The series has become such a phenomenon, it’s beloved by both Israelis and Palestinians.

Written by Israeli veteran journalist Avi Issacharoff and the series’ lead actor, Lior Raz, the show centers around a team of “mistaravim,” Israeli commando soldiers who speak Arabic and operate undercover inside Palestinian territory. The high-octane drama — with both Arabic and Hebrew dialogue — tells opposite sides of the same story.

“We were shocked it made such a splash,” Raz, who is currently shooting the show’s second season in Israel, told TheWrap. “We thought, ‘Who in the U.S. would watch a show in Hebrew and Arabic?'”

Despite the language barrier, “Fauda” (chaos in Arabic), somehow managed to break out of the dark corners of Netflix’s foreign-language section and get noticed by both Hollywood heavy-hitters and New York Times TV critics. Dubbed “The Wire” of the West Bank, the show has been credited with blurring the Israeli-Palestinian divide and bringing some clarity to the disorder and confusion that has long enveloped the Middle East.

The series goes back and forth between the Israeli soldiers charged with infiltrating the enemy and preventing future terror attacks and the Palestinian side, led by Abu Ahmed, aka “The Panther,” a notorious Hamas terrorist who resurfaces after faking his own death.

In one of the show’s most heart-wrenching scenes a widow, whose husband was killed by the undercover soldiers on their wedding day, volunteers to be a martyr. Scared out of her wits, she heads to a Tel Aviv bar and orders a drink. The female bartender, sensing she’s upset, asks her: “What happened? Did someone do something to you?”

That quick interaction creates a connection of sorts. The widow, who was ordered to leave the bomb in the club and exit to a waiting car parked outside, decides to blow herself up along with everyone around her.

“We gave a face to the other side,” Raz said. “We show the complexity of the conflict to the point where the viewer doesn’t know how to feel anymore.”

Reviews have been overwhelmingly positive, and not just from within Israel.

“I’ve gotten fan mail from people in Dubai,” Raz said. “Muslims from all over the world have told us how much they love the show.” 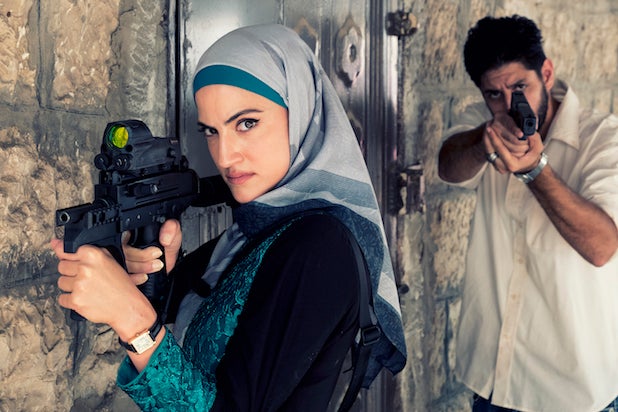 The reaction from the Arab world caught everyone on the show by surprise. But, perhaps, it shouldn’t have. From the beginning, “Fauda” producers signaled an attention to detail that suggested they might be taking a more nuanced approach. They insisted, for example, on hiring only Arab actors for Arab-speaking roles. They also kept true to the different Arabic dialects. According to show producers, about 55 percent of the show’s first season is in Arabic. The second season will be closer to 65 percent.

So authentic, the Israeli military is now using the show to teach its soldiers how to speak better Arabic. According to the Israeli news site Mako, about 50 members of the Israel Defense Forces’ Kfir Brigade took part in a recent experimental Arabic language course, which included watching episodes of the show to get the slang up to snuff.

“There has been a spike in demand for Arabic courses in Israel because of the show,” Raz said. “And that could be a start of a new dialogue.”

To understand just how popular “Fauda” is in Israel, one need not go further than the local marketplace, also known as “Souk,” where the actor who plays “The Panther,” Hisham Suliman, recently got the validation of a lifetime.

“Everyone kept telling him he was their favorite terrorist,” Benasuly-Amit, said. “He’s a bona fide star.”

Raz, who had never written a script in his life before “Fauda,” said he drew on his own experiences. He served in the IDF’s elite unit “Duvdevan” (Hebrew for cherry) which he used as a model for the show. It wasn’t an easy pitch. Raz and Issacharoff got rejections from all the big players in Israel, including Keshet, Reshet (which together operate the country’s mighty Channel 2) and Channel 10.

They finally found a partner in Yes, one of Israel’s largest satellite television providers, which boasts 600,000 subscribers. Yes brass was apprehensive at first but eventually came around. The gamble paid off big-time. The show clocked more than 3 million downloads in its first month (about a third of the country’s entire population) and struck a chord with viewers on both sides of the Green Line.

“Everyone was bracing for protests from the Israeli right,” Ran Boker, who covers entertainment for Israel’s most popular news site, Ynet, told TheWrap. “But that never happened. The series was able to touch people’s minds and hearts. It’s by far the most beloved series in the country in recent memory.”

The show eventually caught the eye of Netflix executives, who purchased the rights to it in December as part of a company effort to boost international subscribers. It was made available globally in its original languages of Arabic and Hebrew, with English subtitles. Netflix also bought the rights to “Fauda’s” second season, which is still in production and will be available on the streaming service sometime next year.

In the last decade, Israel, a pint-size country no bigger than New Jersey, has become the go-to place for executives looking for fresh, original content. The most successful Israeli series to date is “Prisoners of War,” which was remade into “Homeland,” starring Claire Danes.

Other hits include “BeTipul,” the basis for “In Treatment,” which ran on HBO from 2005-2008. More shows are already coming down the pipeline, including “Emmis,” adapted from its original Herbew version “Shtisel,” about an ultra-Orthodox family in Jerusalem; “Wisdom of the Crowd,” a CBS drama about a tech innovator who creates a cutting-edge crowd-sourcing hub to solve his daughter’s murder, starring Jeremy Piven; and “The Brave,” about undercover military heroes from “Homeland” executive producer Avi Nir.

But unlike “Homeland,” which was criticized for perpetuating negative Muslim stereotypes, “Fauda” is being hailed as a groundbreaking series for showing Palestinians in a more even-handed light.

“I watched every episode,” Maz Siam, a Palestinian actor living in West Los Angeles, told TheWrap. “It was like, ‘Oh my God! They’re showing Israeli soldiers killing a [Palestinian] family. I’d never seen that before.”

He knew he was hooked when he found himself feeling sorry for the Israeli protagonist (played by Raz), who finds out his wife cheated on him with his best friend.

“It was a trip,” Siam said. “These people that are your enemies are shown in a way that I would not normally see.”

The “first to get killed,” in most of his acting jobs, Siam said he would relish the opportunity to dig deep into a character that’s multi-dimensional. The last acting gig he booked was for the upcoming season of CBS’ “MacGyver,” where he played one of Saddam Hussein’s henchmen.

“I only got hit over the head with a candelabra this time,” he said half-jokingly. “The only parts I seem to get are cabbies and terrorists.”

Also Read: How Streaming Networks Invaded the Emmys: From 'House of Cards' to 'Handmaid's Tale' (Photos)

“Fauda” has also become a favorite among some Hollywood A-listers. Stephen King, perhaps the authority on thrillers, gave the show his stamp of approval, tweeting earlier this year: “FAUDA, on Netflix. Cool Israeli thriller. With episodes only a little longer than your average sitcom, it’s all killer and no filler.”

And Conan O’Brien, who is currently shooting a special in Israel, filmed a skit with Raz, telling the “Fauda” crew that he is a “huge fan.”

While few expect a TV show to erase years of animosity between Israelis and Palestinians, “Fauda” has given both sides a little bit of hope — a rare commodity in this neck of the woods.

“‘Fauda’ has achieved something remarkable,” Itay Stern, who covers entertainment for Israeli newspaper Haaretz, told TheWrap. “On one hand, it allows us to look at ourselves from the point of view of the commando soldiers. But it also exposed people to how the other side is thinking.”

Also Read: Netflix's 'Disjointed' With Kathy Bates Is the Worst-Reviewed Show of the Summer

Asked what viewers should expect next season, Raz kept his cards close to his vest. The only thing he’ll divulge is that it will be even more jam-packed with action and blood.

“Let’s just say, don’t get too attached to any of the characters next season,” he said.

The show has already made Raz a hot ticket in Hollywood. He’ll be making his English-language debut in “Mary Magdalene,” alongside Rooney Mara and Joaquin Phoenix. He’s also been cast in MGM’s upcoming Nazi thriller, “Operation Finale,” with Oscar winner Ben Kingsley. And earlier this month, Netflix announced a straight-to-series order, with Raz attached to star. A second project, “Hit and Run,” is in development.

“I try not to let it overwhelm me,” Raz said of his life these days. “My wildest dreams were realized with the show’s success in Israel. Everything else is just gravy.”

Still, he admits that every now and then he and his co-writer, Issacharoff, have a hard time absorbing it all.

“At least once a week we have to pinch ourselves,” he said.

Netflix in September: What's Coming and What to Watch Before It's Gone (Photos)

Now that summer is winding down, kids are headed back to class and Halloween candy is already in grocery stores. We can’t wait to cozy up with everything pumpkin spice-flavored we can get our hands on and stream fall TV and new movies on Netflix. Here are our picks of must-watch shows for September.