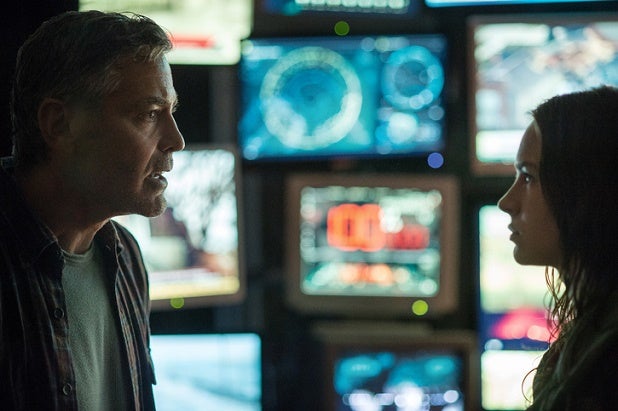 George Clooney, Britt Robertson and Hugh Laurie star in the film, which debuted in 701 hand-picked “movie palaces” across the country. “Tomorrowland” was not only inspired by the iconic founder of Disneyland, but one of its park rides as well, according to Bird and Lindelof, who co-wrote with Jeff Jensen and co-produced with Jeffrey Chernov.

It would have taken in more than the $725,000 it did at the box office had Disney gone wider with its Thursday shows, but it’s clear the studio wants to send the message that the $150 million “Tomorrowland” is something special.

It is, if for no other reason than it’s not a comic book superhero saga or sequel.

“Tomorrowland” is an original movie, something that doesn’t come along often in Hollywood — especially during summer — in large part because it’s typically seen as too risky financially. Recently, Christopher Nolan’s space epic “Interstellar” was a win for Paramount, but Andy and Lana Wachowski‘s “Jupiter Ascending” missed for Warner Bros., the studio that set the modern gold standard for originals with the Alfonso Cuaron blockbuster “Gravity” in 2013.

“Virtually every hit this year has been a derivative of something else, and that brand recognition gave audiences a hook or something that they knew and understood about each of those movies,” he said.

It’s much easier to sell a movie — not to mention toys and music downloads — when the audience already knows the characters and story, so “Tomorrowland,” with its $150 million budget, is a gamble. On the other hand, the Disney brand and a PG rating may be just what a family film needs to connect on a holiday weekend.

“It will be interesting to see if audiences make the leap of faith,” said Dergarabedian. “Audiences love to complain about the lack of originality of the film offerings, yet they are reticent to try something new.

“Perhaps it’s that they’ve been ‘sequel-ized’ to the point where they’ve become conditioned to only get excited when they see the same characters or situations that go along with these known commodities.”

The mystery part? That was created by the Disney marketing machine, which kept the plot under wraps for months, until recently when the “1952 box” was revealed.

The container was found, the movie’s mythology tells, by workmen in 2008 in a studio basement. It contained reference books, concept art, blueprints for the “It’s a Small World” ride, props, machine parts and several snapshots of Walt Disney, all of which Lindelof and Bird cite as source material for the film.

“Tomorrowland” is favored to win the weekend box office, and take in as much as $50 million over the four days. Its competition is the MGM-Fox remake “Poltergeist” (which debuted with $1.4 million Thursday night), “Pitch Perfect 2,” a “Mad Max” sequel, albeit 3o years removed, and Disney’s own comic book superhero saga “Avengers: Age of Ultron.”

But it’s no lock. Four of this very young summer’s top five films are sequels or remakes according to Box Office Mojo, and the same is true for the year, so celebrating originality is by no means the rule of late. But maybe some day.

Which is what “Tomorrowland” is all about, right?