Jake Gyllenhaal‘s gritty indie “Southpaw” is punching above its weight at the box office, grossing $22.5 million in its first week, but the ring is about to get very crowded.

There are four more high-profile boxing movies going to the mat over the near year and a half, from Warner Bros.’ “Rocky” spinoff “Creed” to Robert De Niro’s return to the genre in “Heart of Stone.”

“This is the first time that I can think of where there were so many that it’s threatened to be overkill,” Fandango chief correspondent Dave Karger told TheWrap. “I don’t envy whichever the last one is to come out because there is a chance that people will feel like they’ve seen the movie many times.”

First up after The Weinstein Company’s “Southpaw” is “Creed,” which opens Nov. 25. Sylvester Stallone returns as Rocky Balboa, this time serving as trainer and mentor to Adonis Creed (Michael B. Jordan), the son of his late formal rival, Apollo Creed.

Also later this year, Open Road is expected to release director Ben Younger’s “Bleed for This,” starring Miles Teller as World Champion Boxer Vinny Pazienza, who after a near fatal car crash made one of the sports’ most amazing comebacks.

Robert De Niro‘s “Hands of Stone,” set for release by TWC in 2016, is directed by Jonathan Jakubowicz and tells the story of legendary boxer Roberto Duran and his trainer, Ray Arcel.

Finally, Jamie Foxx is attached to star in an untitled Mike Tyson biopic, which is still in devleopment by producer Rick Yorn.

What accounts for all these big-screen pugilists? Film analysts point to the consistent performance of such films. “The one genre that’s always been strong at the box office are boxing movies,” Jeff Bock of Exhibitor Relations told TheWrap.

While boxing films typically skew more toward male audiences, the genre appeals to a wider cross-section of the populace than many other sports-themed movies. In its first weekend, 43 percent of the audience for “Southpaw” was female, for instance, and less than half was white (24 percent was Hispanic, 21 percent African American).

Plus, as Bock noted: “Jake Gyllenhaal with his shirt off will attract a lot of females.” 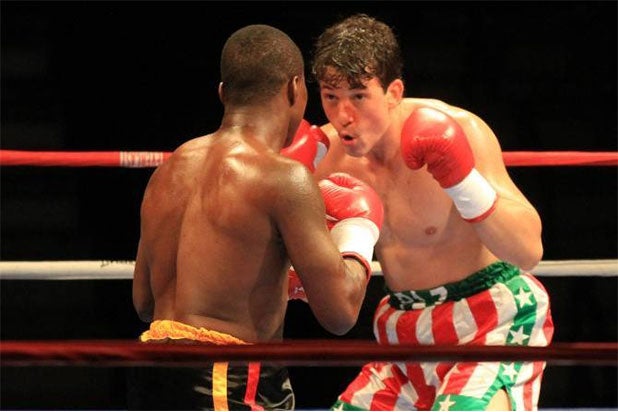 Boxing has long been a go-to sport for filmmakers, the subject of more than 70 movies since 1938. Stallone’s original “Rocky” knocked down $117 million in 1976, while Mark Wahlberg‘s “The Fighter” hit $93.6 million.

“Even if it’s a story that has already been told [before], audiences eat it up,” Karger said.

Bock added, “Boxing has just a lot of built-in combustible drama, especially if they are based on true stories, because they [boxers] are hit in the head one too many times.”

The genre has proved to be a heavyweight at the Academy Awards, producing Best Picture winners “Rocky” and “Million Dollar Baby.”

“If you go to back to ‘Rocky’ or ‘Raging Bull,’ there’s also a lot in it for studios,” Bock said. “It’s one of the few sports genres that you have to take seriously in terms of the dramatic structure of those films, and you can’t really say that about many, many films.”

Actors also relish the chance to play boxers since the role often requires rigorous physical preparation that can pay off with awards recognition as it did for Robert De Niro in “Raging Bull” and Hilary Swank in “Million Dollar Baby.”

“In the sport, you wear hardly any clothes, so it allows the actor to really show off the transformation that he has made,” Karger added.