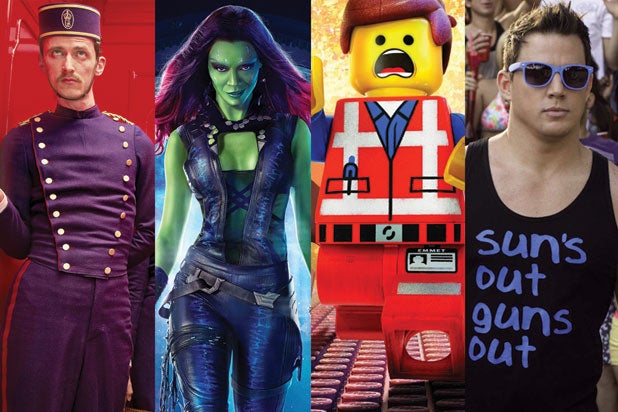 With the holiday season soft, it’s clear the 2014 domestic box office is going to wind up down from last year by nearly 5 percent. So why aren’t we hearing more groans and gnashing of teeth from Hollywood executives?

It’s because despite the downturn, the majority of the studios made money on their movies. Fox, Disney, Paramount, Universal, Warner Bros. and Sony should all — to varying degrees — wind up in the black on their film slates.

The fact that 2015 has a shot to be the biggest on record is brightening Hollywood’s mood, too. Among the heavyweight films set for release: “Avengers: Age of Ultron,” “Star Wars: The Force Awakens,” “Jurassic World,” along with the next James Bond film “Spectre” and the “Hunger Games” finale.

So why was the year down from 2013’s record-breaking haul?

One reason was that this year’s highest-grossing movies didn’t hit the heights that 2013’s did, with no film topping $400 million domestically.

Marvel and Disney’s “Guardians of the Galaxy” is the year’s top film domestically with $332 million, followed by Lionsgate’s “The Hunger Games: Mockingjay – Part 1” ($289 million) and another Marvel-Disney release, “Captain America: The Winter Soldier” ($260 million).

The year took a big hit before it began, with Universal forced to push “Fast & Furious 7” to 2015 following the death of star Paul Walker. The studio’s “Minions” movie will be released in the new year, as well. Disney also delayed Pixar’s “Good Dinosaur.” All had the potential to hit $250 million, which would have moved the needle.

Lower production costs had a lot to do with the studios’ positive bottom lines. Despite the record, 2013 had several megabudget bombs, but this year’s priciest movies connected for the most part. And when movies missed, the hit wasn’t as bad, because the budgets were tighter.

Of the films with $200 million–plus budgets, Paramount’s “Transformers: Age of Extinction,” Fox’s “X-Men: Days of Future Past” and Warner Bros.’ “The Hobbit: Battle of the Five Armies” were all big winners, while Sony’s “The Amazing Spider-Man 2” needed a solid overseas run to overcome an underwhelming domestic performance.

There were no giant bombs, but plenty of high-profile flops, including Johnny Depp’s “Transcendence” and Sly Stallone’s “Expendables 3.”

Here’s a studio-by-studio look at the year, with some of the bigger independent film companies included:

20th Century Fox: This was a tremendous year for the studio, which saw its box office returns spike by 69 percent over 2013, as it posted its best year ever at $1.7 billion. Its biggest films, the “X-Men” sequel and “Dawn of the Planet of the Apes,” both delivered domestically, with $234 million and $209 million, respectively. But the surprising strength of the long-playing David Fincher mystery “Gone Girl,” the tearjerker “The Fault in Our Stars” and the low-budget comedy “Let’s Be Cops” helped a lot, too. The weepy teen romance was one of the year’s biggest films in terms of return on investment, grossing $125 million on a $12 million budget, but “Let’s Be Cops” wasn’t far behind with $82 million on a $17 million budget. Fox seized the studio market-share lead early in the year and will keep it, despite a so-so showing by “Exodus: Gods and Kings” and a slow start for “Night at Museum: Secret of the Tomb.”

Disney: “Guardians of the Galaxy,” featuring a gang of Marvel’s lesser-known superheroes, including an armed raccoon and a talking tree, was the summer and year’s biggest surprise and highest-grossing film. “Maleficent,” a female-driven live-action take on the “Sleeping Beauty” tale and starring Angelina Jolie, held its own alongside the superheroes with over $240 million. Disney Animation’s “Big Hero 6” knocked off “Interstellar” with its $56 million November debut. “Alexander and the Terrible, Horrible, No Good, Very Bad Day” more than doubled its $28 million budget, but “Muppets Most Wanted” was a miss. “Into the Woods,” the Rob Marshall musical, rolls out on Christmas Day.

Warner Bros.: It was the most prolific studio with 21 wide releases, and benefited greatly from several mid- to low-budget hits. Only two have made it to more than $200 million domestically so far, but it’s just a matter of time for “The Hobbit: The Battle of the Five Armies,” which should ultimately hit $270 million. Phil Lord and Chris Miller’s “The LEGO Movie” was the year’s highest-grossing animated film with $258 million and just as significantly launched a franchise, while “Godzilla” stomped to $201 million and spawned a sequel. Tom Cruise’s sci-fi thriller “Edge of Tomorrow” did most of its damage overseas, but still hit $100 million, as did the sequel “300: Rise of an Empire” and Melissa McCarthy’s “Tammy,” which cost $20 million to make. “Annabelle,” a spinoff from “The Conjuring,” was an even bigger bargain, taking in $84 million on a $6.5 million production budget. Another big return came from the teen romance “If I Stay,” which did $50 million on an $11 million budget. The musical “Jersey Boys,” Robert Downey Jr.’s “The Judge,” “Horrible Bosses 2,” the Adam Sandler–Drew Barrymore comedy “Blended” and “Dolphin Tale 2” all underwhelmed, but none cost more than $42 million to make. The sci-fi saga “Transcendence” and the Colin Farrell fantasy-romance “Winter’s Tale” were among the year’s biggest bombs. The Clint Eastwood–directed “American Sniper,” starring Bradley Cooper, opens in limited release on Christmas Day.

Paramount: The fourth entry in Michael Bay’s rampaging-robots tale “Transformers: Age of Extinction” posted the year’s only $100 million opening and is the lone 2014 movie to gross more than $1 billion worldwide. But its $245 million domestic take was dwarfed by the $301 million it made in China. “Teenage Mutant Ninja Turtles,” which came out 24 years after the previous film in the series, helped lead the box office to an August record. Christopher Nolan’s space epic “Interstellar” is at $170 million and still orbiting, and Darren Aronofsky’s Bible tale “Noah” eventually made it to $100 million. But “Hercules,” the $100 million sword-and-sandals saga starring The Rock, fizzled and so did “Jack Ryan: Shadow Recruit” with Chris Pine. With a $5 million budget, “Paranormal Activity: The Marked Ones” made money, but hit a low for the horror franchise. And writer-director Jason Reitman had two box-office bummers: the Kate Winslet–Josh Brolin drama “Labor Day” and “Men, Women and Children.” The studio rolls out “Selma,” the Ava Duvernay historical drama, and “The Gambler” on Christmas Day.

Sony: “The Amazing Spider-Man 2” was the studio’s most-expensive and top-grossing film, but the Marvel sequel’s $202 million domestic total felt like franchise fatigue. The breakout of the Channing Tatum–Jonah Hill comedy sequel, which took in $191 million, was the studio’s finest moment. Denzel Washington’s “The Equalizer,” the faith-based “Heaven Is for Real” and Kevin Hart’s “Think Like a Man Too” were all wins, as were Brad Pitt’s “Fury,” the thriller “No Good Deed” and the “About Last Night” remake, to a lesser degree. But the studio missed with George Clooney’s “Monuments Men,” the “Robocop” remake, the faith-based comedy “Mom’s Night Out” and the horror tale “Deliver Us From Evil.” On Christmas Day, the Seth Rogen–James Franco comedy “The Interview” will roll out after all, in around 200 selected theaters.

Universal: With “Fast & Furious 7” and the “Minions” movie moved to 2015, the studio had to make do without any films with real blockbuster potential. Despite that, the studio had seven No. 1 movies, the same as market-share leader Fox. Taking the top spot were mid-range budgeted films, including the frat comedy “Neighbors,” the Kevin Hart–Ice Cube comedy “Ride Along,” Scarlett Johansson’s sci-fi tale “Lucy,” Liam Neeson’s “Non-Stop,” the war saga “Lone Survivor,” the long-gestating sequel “Dumb and Dumber To” and the teen horror film “Ouija.” The studio’s biggest score was “Neighbors,” which opened to $49 million in February and went on to take in $150 million. But Seth MacFarlane’s comedy Western “A Million Ways to Die in the West” went boots up. “Unbroken,” the Angelina Jolie–directed biopic about war hero Louis Zamperini, debuts on Christmas Day.

Lionsgate: Despite the major success of young adult films “The Hunger Games: Mockingjay – Part 1” and the franchise-launching “Divergent,” the studio’s domestic grosses are off $330 million from its $1.06 billion 2013 haul as Lionsgate distributed only 10 wide releases in 2014 compared to 13 last year. Keanu Reeves’ well-reviewed assassin thriller “John Wick” and Lionsgate/Codeblack’s “Addicted” were bright spots, while “Draft Day,” “I, Frankenstein” and “Tyler Perry’s The Single Mom’s Club” underperformed and “Expendables 3,” hit by piracy, misfired.

The Weinstein Company: Other than “The Giver” and the Bill Murray comedy “St. Vincent,” both of which topped $40 million domestically, this was a down year. TWC is among the best at turning awards into box-office business, however, and “The Imitation Game” and Tim Burton’s upcoming “Big Eyes” are still in that game. “Begin Again,” “The Immigrant” and “The Disappearance of Eleanor Rigby” failed to connect, and “Vampire Academy” and “Frank Miller’s Sin City: A Dame to Kill For” were misses, too.

DreamWorks: Lasse Hallstrom’s restaurant tale “Hundred-Foot Journey” doubled its $22 million budget. But the hot car tale “Need for Speed,” starring Aaron Paul of TV’s “Breaking Bad,” disappointed with $43 million. It was smash in China, however, bringing in $66 million there.

DreamWorks Animation: “How to Train Your Dragon 2” soared to $177 million, but didn’t hit the heights the studio had hoped for. The same was true for “Mr. Peabody and Sherman” ($111 million) and “Penguins of Madagascar,” which has slowed down at $64 million after four weeks.

Relativity Studios: Its low-budget, narrow-profit margin formula works, and it would have worked even better had even one of its films broken out. But the strategy also prevents big losses from a single film. The kids movie “Earth to Echo” was its highest-grossing release with $39 million. The horror film “Oculus” became the highest-grossing movie to come out of the 2013 Toronto Film Festival, taking in $27 million on a $5 million budget.

Open Road: It had its biggest animated hit ever with “The Nut Job,” which was its highest-grossing release with $64 million. Jon Favreau’s food-truck comedy “Chef” became the summer’s biggest indie hit with $31 million, and the Jake Gyllenhaal thriller “Nightcrawler” is at that same figure and still playing. “Rosewater,” the political drama written and directed by

Fox Searchlight: The niche label had the year’s biggest indie hit with writer-director Wes Anderson’s “The Grand Budapest Hotel,” which took in $59 million. Two other awards hopefuls, “Birdman” and “Wild,” have done well. Alejandro Iñárritu’s dark comedy is up to $21 million, and the Reese Witherspoon survival saga crashed the top 10 in its third-week expansion last weekend.

Focus Features: “The Theory of Everything” was its highest-profile release, and the Stephen Hawking biopic starring Eddie Redmayne and Felicity Jones will get a boost if it can score in awards season. But its top-grossing film was the Laika Entertainment animated kids film “The Boxtrolls,” which took in just over $50 million.

Freestyle Releasing: Its biggest hit was the faith-based indie film “God’s Not Dead.” Made for $2 million, it took in $60 million and was part of string of successful religious-themed films in the spring. “Left Behind,” a remake of Kirk Cameron’s 2000 film that starred Nicolas Cage, drew a lot of media attention, but not enough moviegoers.

Sony Classics: Awards hopefuls “Whiplash” and “Foxcatcher” are its best hopes to turn around a tough year. To date, its top-grossing film has been “Magic in the Moonlight,” which at $10 million is Woody Allen’s weakest release in years.

Roadside Attractions: The spy thriller “A Most Wanted Man,” starring the late Philip Seymour Hoffman, was its only film to gross more than $6 million.

IFC Films: It’s all about writer-director Richard Linklater’s 12-years-in-the-making “Boyhood.” The real-life coming-of-age tale has taken in $24 million and has an inside track on a Best Picture Oscar nomination, which would likely bring a re-release.