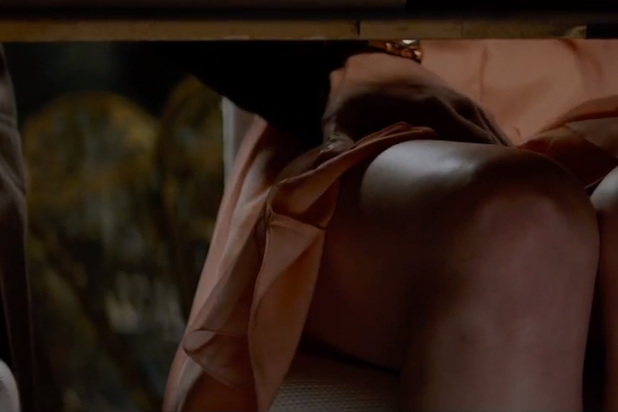 It was then that it hit me that 100-plus-year-old stone-cold vampire Edward was painfully screwing his warm virgin bride, bringing new meaning to the characterization that he was a cold, hard prick. Sure, I had read the scene in paperback, but seeing it made me redefine the Bella character as a submissive — a natural story predecessor to “Fifty Shades of Grey.”

Was reading the book and seeing the film so different of an experience that it would alter the story for me completely? Until I saw that sex scene, I had never thought about the mechanics of how old-man vampire and teen girl would make love. While I read the book, my thoughts were Finally, they can get some, smiling while thinking of doing something romantic with my sweet husband. In the theater, my only thought was Ouch! Poor unsatisfied, virgin Bella.

A Brief History of the Significant Research

In 2009, researchers at UC California at Davis, Dean Keith Simonton and Anemone Cerridwen found that nudity and explicit sex scenes don’t sell major motion pictures. “Sex did not sell, whether in the domestic or international boxoffice, and even after controlling for MPAA rating,” Simonton said. The biggest blockbusters kept the bedroom door closed.

In 2012, Ira Kalb, assistant professor of Clinical Marketing of USC’s Marshall School of Business, challenged the “Sex Sells” mantra in Business Insider and explained that sex sells only when the product being sold is related to sex, steering decision-makers away from explicit sex in film and advertising. For non-sexual products including mainstream teen or family films, explicit sex reduced product recall and liking.

At the same time that all this research showed studios the risk of explicit sex in film, the “Breaking Dawn, Part 2” movie released on November 2012, concluding the book and film series that inspired an erotica story trend. The “Fifty Shades of Grey” ebooks were emerging from “Twilight” fan fiction erotica e-reader shelves. First published in 2011, with the third, “Fifty Shades Freed,” in January 2012 the ebooks soared in popularity, bringing E.L. James a traditional publishing deal that has sold over 100 million copies and has the potential to sell even more than its “Twilight” parent.

Meanwhile, the top grossing films year-over-year do not contain explicit sex scenes. None of the top 10 films of 2014 have an explicit sex scene. Are consumers buying movie tickets to the sexually clean types of movies they want to see or are studios too influenced from flawed research?

New research presented by Robert Lull at the 2014 meeting of the Society for Personality and Social Psychology working with Brad J. Bushman, Ph.D., professor of Communication and Psychology, again says that sex doesn’t sell out of context.

Lull’s timely research, conducted with awareness that the erotica frenzy challenged existing data, looks at dozens of previous studies to summarize the research in a specific field. The paper which will be released later this year analyzed both the effects of violent/sexual media on brand memory, brand attitudes and buying intentions and the effects of violent/sexual ads on brand memory, brand attitudes, and buying intentions. In other words, Lull examined (1) violent/sexual programs in which ads are placed and (2) ads that feature violence and sex themselves and found:

- Brand memory, brand attitudes and buying intentions all decreased as the intensity of sexual ads increased.

All Studios Have Eyes on the Theater Seats

As Lull’s work relates to the “Fifty Shades” film’s chance at blockbuster rankings, the questions will be if R-rated moviegoers want to consume an intense-sex story at the local cinema:  Will sex sell a sex movie to the audience that read the ebook? Will they evaluate it positively? Will they recommend it to others?

For all of the moms who said goodbye and thank you to their beloved Edward and Bella and then made its”Fifty Shades of Grey” offspring a huge bestseller, there is a difference between a bored mom laughing about some nasty sex scene with her friends during book club and watching it at the neighborhood cinema in the dark.

Will explicit sex create a blockbuster on screen?

Try watching Jamie Dornan and Dakota Johnson in the sexy “Fifty Shades of Grey” trailer without squirming a little in your seat. TheWrap ranks 15 of the most squirm-worthy moments with our notoriously accurate “Squirm Scale”

"Mr. Grey will see you now."
The anticipation builds as you realize this is the moment you will be able to put a face to THE Christian Grey.
Squirm Scale: 1.3
View In Gallery
BIO Carla J. Hanna
Carla J. Hanna lived in Santa Monica, California, where her children played with the children of celebrities. She mingled with plenty of nannies and a few good celebrity moms. Her award-winning books, "The Starlet Series," are available through Amazon.com, BarnesandNoble.com and wherever books are sold. For more information please visit: www.carlahanna.com.

Carla J. Hanna lived in Santa Monica, California, where her children played with the children of celebrities. She mingled with plenty of nannies and a few good celebrity moms. Her award-winning books, "The Starlet Series," are available through Amazon.com, BarnesandNoble.com and wherever books are sold. For more information please visit: www.carlahanna.com.