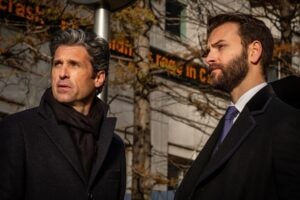 Why iHeartMedia CEO Bob Pittman Is Doubling Down on Podcasts

”Just like in the TV or movie business, if you have a first look that is inherently an advantage and we intend to use that,“ Pittman told an investor conference Thursday

IHeartMedia chief executive Bob Pittman said Thursday that the radio company plans to double down on its podcast efforts after podcast revenue doubled during the second quarter of this year.

At the Bank of America Securities virtual conference on Thursday, Pittman and chief operating and financial officer Rich Bressler said iHeartMedia plans to continue producing and acquiring new podcasts after reporting podcast revenue grew 103% year-over-year in Q2 this year. (Revenue generated so far this year by podcasts is up 92%, the company said in its earnings report released Aug. 6.)

The network reported in July that its podcasts counted 225 million monthly downloads worldwide and hopes to use that success to lure top talent to the genre. “We’re the first stop for someone who wants to make a big podcast,” Pittman said. “Just like in the TV or movie business, if you have a first look that is inherently an advantage, and we intend to use that.”

Also Read: Why the 'Pandemic-Proof' Podcast Ad Industry Still Has Room to Grow

A growing podcast business is key for iHeartMedia, which emerged from bankruptcy in January 2019 and reported a 47% drop in second-quarter revenue, to $488 million. The company retains roughly $5.8 million in long-term debt, according to its second quarter report. While Pittman focused on the growing podcast business, the company’s revenues declined in almost all other major sectors of the business — including broadcast, network, sponsorship and events and audio and media services.


Predictably, the hardest-hit area of iHeart’s business in Q2 was its sponsorship and events business, which saw revenue decline 65% as coronavirus forced the typically packed summer conference schedule to go remote. iHeartMedia’s broadcast revenue declined 57% in the quarter to $244 million, while its network revenue sunk 38%.

iHeartMedia laid off roughly 1,000 employees in January prior to the pandemic, and further cut and furloughed more employees since March. The company wouldn’t disclose how many employees have been furloughed or laid off since the beginning of 2020 but noted it expects to save up to $250 million from the cutbacks by the end of this year.

So it’s no wonder that Pittman has been eager to talk up the company’s one area of growth. IHeartMedia recently struck a deal with radio presenter Charlamagne Tha God to launch a subsidiary network called the Black Effect Podcast Network and agreed to carry several new podcasts from ViacomCBS, including audio content from “The Daily Show with Trevor Noah” and a hip-hop interview series with MTV called “Yo! MTV Raps.”

Pittman also said that iHeartMedia intends to increase its efforts in courting big-name brands to commit ad dollars to its shows. Pepsi recently signed on to sponsor shows on the Black Effect Podcast Network.

“Even advertisers that aren’t doing podcasting say they want to get into podcasting and its one of the real areas of focus. For us, this is a tremendous growth area,” Pittman said.

While other industries are struggling to place ads and achieve positive cash flow during the pandemic, podcasting is virtually recession-proof. A recent report by Magellan AI and paid for by podcast publisher Westwood One found the average number of ads placed on podcasts is up 9% compared to April of this year — while the International Advertising Bureau expects the podcast industry to grow ad revenue by nearly 15% by the end of this year.