John Grisham may be one of the most successful authors, well, ever, but he still has hopes for his books. Namely, he would like them all to be banned. Yes, for real.

Grisham revealed his hope when he stopped by “The View” on Tuesday to promote his newest book, “The Boys from Biloxi: A Legal Thriller.” During the interview, the acclaimed writer discussed his writing process, why he doesn’t write sex scenes (that’s because of a combination of input from his wife and mother) and more. But during the conversation, host Sara Haines asked for Grisham’s input on the increased effort to ban books in schools in recent years.

“Oh, I love banned books. I wish all my books could be banned,” Grisham replied.

The table laughed, earning a chuckle from Grisham himself, but in reality, he was serious as he said it. And there’s one very simple reason why he’d like to see his life’s work banned. 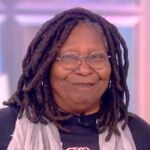 Grisham then admitted that his books have been banned in some places in the country — specifically prisons. The author noted that his books are banned in the Texas state prison system, and were “once banned at Guantanamo,” though he never learned why on either count.

Speaking more seriously on the issue Haines asked him about though, Grisham said that banning books at large can get dangerous.

“Once you start banning books, it’s a slippery slope. Where does it stop? Who gets to ban? What are the motives of people doing the banning? It’s just a mess, and we shouldn’t do it.”