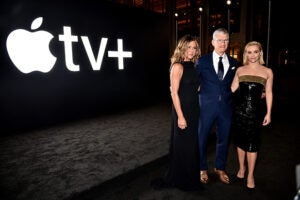 Apple TV+: How a Tech Company Built a Streaming Service From Scratch by Going All-In With Originals

”We were able to show audiences everywhere that this isn’t a comic book movie for the whole family but does provide something different and interesting,“ Andrew Cripps, President of International Distribution for Warner Bros., told TheWrap

Every weekend, “Joker” has continued to defy box office expectations. With $851 million grossed worldwide through four weekends, Todd Phillips’ Golden Lion-winning comic book movie is now the highest grossing R-Rated movie ever released, and it has a good shot at hitting $1 billion despite being anything but family friendly.

What’s interesting about the barnstorming October this DC movie has had at the box office is how both its long-enduring run and its evolving audience are extremely similar in both the U.S. and internationally. Domestically, “Joker” opened to a strong but not record-breaking $96 million and since then has not had a weekend-to-weekend drop above 50% as it has earned a running count of $277 million and could get close to the $327 million total of fellow R-Rated WB release “It.”

Such strong holds have also been seen in the film’s international weekend totals, which sit at $574 million so far and rank third among all DC films. Within that are all-time Warner Bros. records in 14 countries, including Russia and Mexico, over $100 million grossed in Latin America, and DC movie records in 34 countries, including Japan, Italy and Argentina

Andrew Cripps, President of International Distribution for Warner Bros., told TheWrap that much like in the U.S., the perfect storm of pre-release publicity buzz was the key to “Joker”‘s success throughout the rest of the world. It started with the film’s shocking victory at the Venice Film Festival and was followed by reports of increased security at some theaters. Phillips’ polarizing response to the pre-release backlash just further established “Joker” as a hot-button topic before it even hit theaters.

And the only way for moviegoers to determine whether the hype and fears were truly justified was to see the film for themselves.

“We’re seeing strong turnout from the sort of people who would never otherwise see a film like this, and I think that’s credit to both the pre-release publicity and the really strong job our marketing team did promoting the film in all territories,” Cripps said. “We have to deal with different ratings standards from country to country, but overall we were able to show audiences everywhere that this isn’t a comic book movie for the whole family but does provide something different and interesting.”

Sure enough, there were no shootings the weekend Joker came out… but there were plenty of rave reviews from hardcore DC fans. Most of that hardcore fanbase skewed millennial and male, with 64% of the domestic audience being men. While the opening was lower than more family-friendly DC films like “Wonder Woman” and “Aquaman,” the film’s strong word of mouth with a 4/5 on Postrak and 91% audience score on Rotten Tomatoes was enough to get casual moviegoers who were on the fence about seeing “Joker” to go see it to be part of the watercooler talk.

So in the last couple weeks, “Joker” has seen its audience slowly expand to all quadrants. College-age, Gen Z moviegoers have particularly turned out recently, as the weekend audience share for ages 18-24 has risen from 22% on opening weekend to 36% now, according to WB’s demographic data.

The audience also has become more populated by women and infrequent moviegoers. According to data from analytics firm Movio, “Joker” saw a 21% growth in female audience share from first to second weekend, higher than the jump for “Aquaman” (14%) and “Venom” (18%). The decline in frequent moviegoers — those who buy a ticket at least once per month — from the first to third weekend also stood at 15%, compared to 10% for “Venom” and 8% for “Aquaman.”

Even as the initial core demographics have remained strong thanks to repeat viewings from millennial men, it is interest from women, Gen Z, and some older audiences possibly intrigued by Phoenix’s growing awards buzz that have the film approaching $300 million domestic and $900 million worldwide.

While it hasn’t earned the unanimous praise of something like “Avengers: Endgame” — largely because it isn’t designed as a crowd pleaser — “Joker” has earned enough praise beyond the male comic book fans expected to be its biggest champion to defy the usual box office ceiling set for R-Rated films. While other recent populist awards contenders like “Get Out” and “Black Panther” have made their millions first and then become Oscar favorites months later, “Joker” has hit that increasingly rare spot of a film that grows momentum for both simultaneously.

With a very crowded November slate coming up, it’s not entirely sure whether the film’s late-stage theatrical performance will be enough to push it pass the ultimate $1 billion benchmark. But whether or not it does, this $55 million crime drama with clown makeup and DC pedigree has proven once again that the power of the comic book genre over the box office as it delves into lower budgets, darker tones, and more topical issues.