As played by Finn Wittrock in 20th Century Fox’s “Judy,” Deans was a smooth operator who charmed his way into the legend’s life during her declining years. A jazz pianist and manager of a hot New York disco at the time, he was 12 years her junior and, for a time, showered her with the adoration she craved.

But Garland’s family, including daughters Liza Minnelli and Lorna Luft and her ex-husband, Sid Luft, had a weird, unhappily-ever-after feeling about Deans from the beginning. In fact, Minnelli didn’t attend their London wedding.

In Lorna’s book “Me and My Shadows: A Family Memoir,” she recalls Minelli begging off by saying, “I can’t make it, Mamma, but I promise I’ll come to your next one!”

Lorna wrote that when she heard about her mother’s wedding on the evening news, she thought to herself, “Who the hell is Mickey Deans?'”

Whatever her family’s opinions, Garland spoke about her love for Deans in what would turn out to be her last interview. She told Radio Denmark:

I didn’t have a rich life until I met Mickey…I’m happily married to a man who is about to give me the protection and help I need, and I can just do a concert now and then, when I feel like it. And at night, when I’ve done a concert, I don’t have to be alone in a hotel room. Now I can go home with my husband and that’s much nicer.

Deans goes into detail about their life together in his book “Weep No More, My Lady,” which was published three years after her death and says she leaned on him heavily. He also testifies to the profundity of their love.

“There were also many hours in the early dawn when my wife and I found love that had never existed before either of us,” Deans wrote. 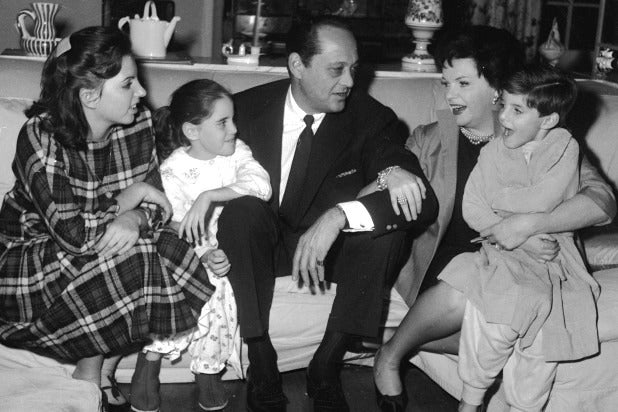 Three months after Garland and Deans’ exchanged vows, she died of an accidental overdose of barbiturates. At an inquest in London, Coroner Gavin Thurston said that her autopsy showed there was no drug residue in her stomach, meaning that she had ingested the drugs over a long period of time, not all at once.

Lorna wrote that Deans’ actions the day of Garland’s funeral didn’t exactly endear him to her.

“In a move that takes my breath away to this very day when I think of it, Mickey had scheduled a meeting and wanted me to go along,” Lorna wrote, adding that Deans and another man “discussed some sort of business deal” in her presence.

“Months later someone told me the other man was a publisher, and that Mickey had arranged to stop by on the way back from my mother’s funeral to cut a deal on a Judy Garland biography. I don’t know if it was true, but his book did come out a couple of years later under the title, ‘Weep No More, My Lady.’ Needless to say, I didn’t buy a copy. Mickey Deans. What a putz.”

Lorna added that, “for a long time after I learned what killed her, I blamed Mickey Deans.”

Lorna’s father and Garland’s third husband, Sid Luft (who produced “A Star Is Born,” which earned her an Oscar nomination), didn’t pull any punches in his memoir “Judy & I: My Life With Judy Garland.”

“She would pop those things like candy,” Luft wrote about Garland’s use of Seconal, “so you’d have to watch her. Judy would tell me, ‘Don’t put more than three Seconal by my bed,’ and I’m sure she told him, too. I have to believe that Deans did it purposely. They say Judy had 30 or 40 Seconal next to her bed, and Deans was nowhere to be found. He disappeared, this f—!”

After Garland’s death, Deans had a four-year relationship with Rose Driscoll, and they adopted a son, Richard. Deans moved to Cleveland in the late 1970s, where he lived until his death in 2003 from congestive heart failure. He never remarried.

'Wizard of Oz': 10 Things You Probably Didn't Know About the Classic (Photos)

Here are a few bloopers, wardrobe malfunctions and behind-the-scenes secrets of the film that made Judy Garland a star

It was 80 years ago today that a cyclone whisked Dorothy from her drab, sepia tone life in Kansas to the Technicolor land of little people, bewitched poppy fields and flying monkeys. You may know the story well, but here are a few things about "The Wizard of Oz" that might take you by surprise.