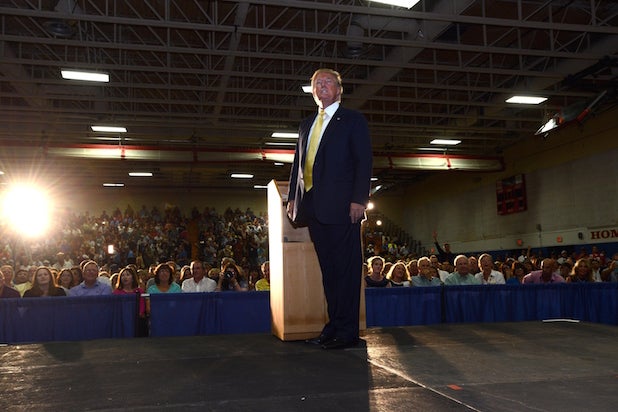 With 13 months to go until election day, an eternity in politics, presidential candidates are seeing their coffers draining at an alarming rate. And they have one person to blame: Donald Trump.

Trump’s presidential rivals are being forced to shell out big bucks on TV ads much earlier than in any other election cycle, with a whopping $20 million already spent on broadcast commercials. That’s compared with only $2.1 million at this same point during the last election cycle — a tenfold increase.

“You have one candidate polling exceedingly well and you worry you have to drag that candidate down,” Harry Enten, political analyst for FiveThirtyEight, told TheWrap. “So yeah, there is a ‘Trump effect.'”

The former reality-show host’s wall-to-wall coverage on multiple news and entertainment channels has yielded an unending supply of free publicity.

A Media Research Center study, which looked at a two-week period from August to September, found that Trump took up nearly 78 percent of CNN’s primetime GOP campaign coverage.

Of the 747 total minutes, 580 were spent on the billionaire Manhattan real estate developer. That means the 16 other candidates got a combined total of just 167 minutes. And even that was mostly spent comparing them to Trump.

“Trump is getting a tremendous amount of free media, taking all the oxygen out of the room,” Washington campaign finance attorney Ken Gross told TheWrap. “The other candidates are having trouble getting noticed and paid media would be a part of that process.”

Traditionally, candidates wait until later in the campaign cycle before spending significant money on TV ads. With so many contenders still in the running, dropping too much cash too early would normally be considered a luxury.

“TV stations are going to be doing very well in the next few months,” Jack Pitney, professor of government at California’s Claremont McKenna College, told TheWrap. “My advice? Buy stock in TV stations.”

Fueling this bombastic TV push: super-PACs. Thanks to the Wild West that’s emerged since the Supreme Court’s 2010 Citizens United decision, Jeb Bush’s super-PAC has amassed a record-breaking $103 million in the first six months of the year. That’s on top of the $11 million his campaign raised.

“This cycle certainly has unprecedented money in it,” said Gross. “The explosion of outside money through super PACs will most assuredly make this a record breaking season.”

That money is already finding its way to the bank accounts of TV stations, particularly in key early-voting states.

According to data from NBC ad-tracking partner SMG Delta, nearly $3.3 million was spent last week on political TV ads. Of that, 81 percent came from super PACs or outside groups. To be fair, super PACs usually pay more for TV ads than campaigns do, so they get less bang for their buck.

The biggest spender last week was Jeb Bush with $1.1 million. The now-defunct Scott Walker campaign spent about $580,000 in Iowa alone, all from super PAC money.

Team Clinton came in third with $447,000 spent in Iowa and New Hampshire. But unlike Bush or Walker, her spending all came from campaign money.

Meanwhile Trump, the richest candidate on either side by a landslide, has spent, get this… zero dollars on advertising, TV or otherwise.

“I’ve gotten so much free advertising, it’s like nothing I’d have expected,” Trump told the New York Times on Friday. “When you look at cable television, a lot of the programs are 100 percent Trump, so why would you need more Trump during the commercial breaks?”

According to Trump, the extensive TV coverage saved him at least $15 million in campaign commercials over the summer.

Not to mention, it’s the kind of publicity other candidates can only dream of.

“Not only is Trump getting more attention, he’s getting the kind of attention money can’t buy, literally,” Chad Kawalec, advertising expert and founder of the Los-Angeles based Brand Identity Center, told TheWrap. “He’s sucking up so much of the free attention, the only way the other candidates can have a voice is to buy it.”