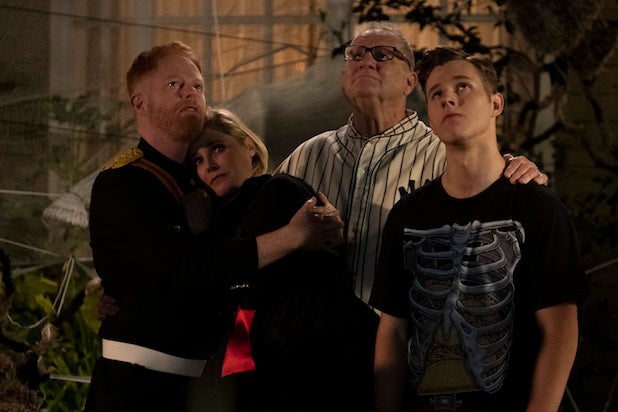 “Modern Family”s annual spooktacular Halloween episode delivered on the ABC sitcom’s long-teased promise to kill off one of its characters Wednesday night. It just may not have been who you suspected it would be — and you may not understand why she was the one to go and why it was on Halloween. Don’t worry, creator Steve Levitan has answers. And they are a little “silly.”

The Pritchett-Dunphy-Tucker clan learns at the top of the installment, titled “Good Grief,” that Claire and Mitchell’s mother Dede (Shelley Long) — Jay’s ex-wife — had passed away. The rest of the episode is dedicated to her family processing her death in different ways, all while dressed in a variety of costumes unconducive to mourning.

Also Read: 'Modern Family': Which Character Was Killed Off?

Because “Modern Family” had been teasing a character death since before the tenth season premiered, many fans theorized about who it would be. Levitan said that Dede ended up being the “logical choice” when deciding to cut a character’s life short, “because it so directly affects three of our main characters.” And there was, of course, a significant reason behind the Oct. 31 death date.

“It was also just a very nice send-off to the character and to Shelley Long, so it seemed like the thing to do,” Levitan told Entertainment Weekly in an interview published Wednesday. “The idea, though, for setting it on Halloween came about because, well, I’ve always had a love for people going through something that is unexpectedly serious while in a silly costume. I’ve always just loved that sort of thing. We always do Halloween shows, and they’re a big part of this year’s series, so we thought, “Well, let’s try to do something that’s wildly different this Halloween.” And since it is, strangely enough, a holiday that deals with so many themes of death and things that are scary and all that, it seemed in a strange way appropriate.”

As for all the hype surrounding the episode, Levitan said he feared that fans wouldn’t be satisfied when they finally got their answer.

“I was, frankly, a little bit afraid that we, in a weird way, overpromised,” the sitcom’s creator said. “That people were thinking it’s one of our main main regulars, and we would hear some occasional weird theories on that. I guess I think we were all a little bit shocked at how much we’ve been asked in real life, ‘Who is it?’ It really took us by surprise…. Maybe [viewers will] be pleasantly surprised that it wasn’t one of our regular people, but I hope we don’t disappoint, as strange as that sounds, or that they were gearing up for more and say, ‘Oh, is that all?’ But it’s significant to us. She’s a very significant character in so many of our characters’ lives that it’s still meaningful.”