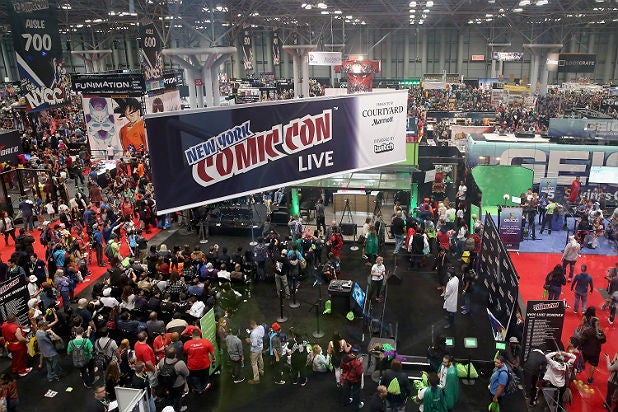 For the past few years, New York Comic Con has had something of a second city syndrome in comparison to San Diego Comic-Con. The wave of major studios showcasing their wares in San Diego was the catalyst for the flood of pop culture fans to the annual July convention and the reason for its massive explosion in the past few years.

While SDCC has reaped the benefits from the hype that Marvel and DC bring, movie studios have typically eschewed NYCC to this point. But they would be wise to no longer overlook the East Coast convention. The movie marketing cycle is changing, shifting to a 365 day/year timetable, and the savviest of studios utilize New York Comic Con as a major part of that.

This past summer, waves went through the entertainment industry when Marvel Studios announced it would not be attending San Diego Comic-Con. Both Sony Pictures and Paramount skipped out as well, meaning the convention was without three of the biggest movie studios in attendance. The problem is that SDCC has become such a spectacle, studios must now pull out all the stops. Unless a studio panel presentation arrives with all the bells and whistles of exclusive trailers, new cast members and announcements, the juice is simply not worth the squeeze. As Marvel put it, there wasn’t enough news or material ready for July’s SDCC; Sony and Paramount were in the same boat, with film cycles that didn’t align with the summer Con.

And that’s where New York Comic Con comes in.

Studios should consider making an appearance at NYCC based on the following three reasons:

It puts the timing back in their hands

Making an appearance at NYCC breaks the timetable for a studio to have material ready for July. There is no more scrambling to put together half-finished sizzle reels or a panel that is less than 100 percent. With material virtually guaranteed to be leaked after a big convention panel now, studios have had to contend with unfinished footage hitting the internet and leaving an unsavory first impression on fans. Damage control is to be expected in the wake of a convention, particularly when something with unfinished CGI or editing leaks. And leak, it will.

But with NYCC happening at the beginning of October, it gives studios three extra months to prepare. If a studio has material ready to go for San Diego, that’s wonderful — but if not, they no longer have to rush to present something solely for the sake of making an appearance. The footage will still be leaked, but it will be the footage studios want fans to see rather than an unfinished product.

It buffers against backlash
While a studio like Marvel can disappoint fans by being an SDCC no-show without suffering a hit, the same cannot be said for all studios, especially those with riskier movies or less well-known properties. They need to continually keep the buzz for projects bubbling, and there is no greater buzz than that generated from a great panel at a convention.

A no-show at a major convention can signal to fans that the timing of a studio’s film cycle just wasn’t lining up, but can also indicate that a production is in trouble: Reshoots are needed, the shot film just isn’t cutting correctly, the CGI is a mess, contract renegotiations aren’t going well, etc. Just as good buzz can boost a film, bad buzz can break it, whether or not that negativity is warranted. A studio announcing they will be skipping San Diego but are heading to New York reassures fans that all is well and the production is on track.

Little to no competition at the moment
It’s known by now that the Saturday panels in Hall H at San Diego Comic-Con are the most sought-after panels at the convention — and it’s not even close. The “Big 2” — Marvel Studios and Warner Bros.’ DC slate — will always present on Saturday, and everyone else gets out of the way. If another studio is unlucky enough to have their panel scheduled during Saturday afternoon at the same time, their attendance is usually steamrolled by the juggernaut of Hall H.

But a smaller studio getting the jump on attending NYCC would provide for zero competition at the biggest pop culture convention in North America. For indeed, NYCC 2015’s estimated attendance of 165,000 dwarfs that of SDCC’s 130,000. It’s the perfect platform for smaller, riskier, and less well-known movies to make a splash and generate interest in a way that they couldn’t at San Diego while standing in the shadow of Marvel and DC.

Attending New York Comic Con is no guarantee that a studio’s project will turn out well or its movie well received. But it could start to level the playing field and offer studios a chance to give fans what they really want – great panels and jaw-dropping footage that will keep the hype machine turning.

There are two sides to Comic-Con. This gallery is about the right side of the collage.

View In Gallery
BIO Alisha Grauso
Alisha Grauso is the Editor-at-Large of Moviepilot, the fastest-growing movie and entertainment website and fan community in the world. Since joining the company in 2012, Alisha has helped oversee and shape editorial content at Moviepilot. She also helps lead Moviepilot Magazine, a monthly digital magazine featuring premium feature content that lives on top of Moviepilot's social platform. Alisha is passionate about giving young fans a place to let their voices be heard, particularly in geek culture, and uses pixel, pen, and platform to talk about the things that matter in pop culture and society.

Alisha Grauso is the Editor-at-Large of Moviepilot, the fastest-growing movie and entertainment website and fan community in the world. Since joining the company in 2012, Alisha has helped oversee and shape editorial content at Moviepilot. She also helps lead Moviepilot Magazine, a monthly digital magazine featuring premium feature content that lives on top of Moviepilot's social platform. Alisha is passionate about giving young fans a place to let their voices be heard, particularly in geek culture, and uses pixel, pen, and platform to talk about the things that matter in pop culture and society.
x
Looks like you're enjoying reading