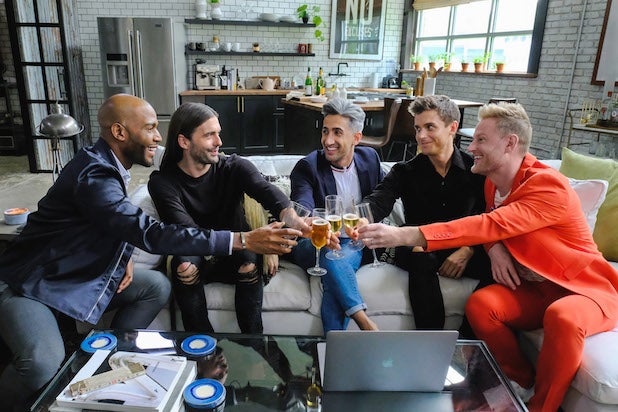 Back in 2003, when “Queer Eye for the Straight Guy” first premiered on Bravo, we were listening to “Hey Ya!” by Outkast, talking about Britney Spears and Madonna’s smooch, and all had a crush on Orlando Bloom as Legolas from “The Lord of The Rings.”

But the creator of the landmark makeover reality show, David Collins, insists that the new Netflix reboot, which begins streaming Wednesday, is still relevant for millennial audiences.

“A lot’s gone on in the past 15 years,” Collins told TheWrap. “We realized that there’s a great opportunity — and need, quite frankly — for a show like ‘Queer Eye’ to come back, and to enjoy the fun and the humor and the heart with a new audience. And, also to an audience who obviously knew the show and has been asking for it for a while now.”

The show, which ran for five seasons on Bravo, involved five fabulous gay men with different area of expertise to coach a straight guy into improving his life (usually to make him more appealing to the ladies in his life).

The reboot keeps the same format, but with an abbreviated title (“Queer Eye”) and a new set of gay experts: Antoni Porowski handles food and wine instead of Ted Allen, interior designer Bobby Berk takes over for Thom Filicia, Jonathan Van Ness replaces Kyan Douglas in grooming, Tan France steps in for Carson Kressley as the fashion guru, while Karamo Brown handles culture duties instead of Jai Rodriguez.

While some have criticized the show’s format as outdated for 2018, Collins insists that the show that promotes acceptance at a time when the country is so divided.

“There’s still a lot of young women and men out there who don’t have mentors or folks that look like them or are like them on television,” Collins said. “So it’s great to bring that back and have that be done in a very updated, modern way.”

When the show was two years old, during the 2005-2006 season, only 2 percent of series regulars on TV shows were gay, according to GLAAD’s yearly study into queer representation on TV. In 2016-2017, 4.3 percent were identified as gay, lesbian, bisexual, transgender, and queer, the highest GLAAD has ever found.

Collins thinks that the show’s new star reflect those changes — and could help push the LGBTQ message forward.

“Karamo’s a dad, Bobby’s been married for 15-plus years, all of those things allow the audiences that aren’t on the coasts to see real gay men and their lives and who they are,” he said. “As Tan [France] says in the trailer, this is not just about tolerance this is about acceptance now.”

The reboot “Queer Eye” is available to stream on Netflix Feb. 7.