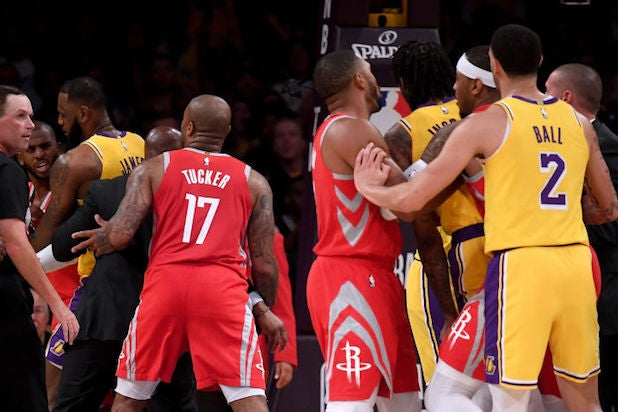 The Wrap has partnered with Canvs, the emotion measurement AI company, for a weekly look at some of the characters and personalities that have TV viewers the most worked up on social media. The data below covers Oct. 17-23 and is drawn from the most emotionally reacted-to television programs, including broadcast, cable, streaming and PPV.

A guard for the Los Angeles Lakers, an actress returning to “American Horror Story” and the L.A. Dodgers had viewers talking passionately on social media over the past seven days.

ESPN’s broadcast of the Houston Rockets vs. Los Angeles Lakers game was one of the most emotionally reacted-to programs of the period measured, generating 95,333 Emotional Reactions (ERs). Lakers guard Rajon Rondo drove a ton of emotion during the game, especially at the end when a fight broke out between him, Chris Paul and Brandon Ingram, which resulted in ejections from the game and subsequent suspensions. Viewers had a lot to say about the brawl and where to place blame.

This Lakers Rockets game is crazy. IMO – Ingram and Paul initiated everything. You can’t push a man in his back nor try to poke a mans eye out.
.
Rondo was responding to Paul’s eye jab
.
In other news Lance Stephenson was as cool as the other side of the pillow.

This is gonna end up being about Rondo and CP3 but main cause of this stupid fight was Ingram. For no reason he first pushes Harden, then gets in refs face and after Melo and Zo calm him down he rushes back and throws a sucker punch…

i never liked CP3 vibe-wise. not surprised Rondo snuffed him. CP3 been had it coming. he always got an attitude. no ring but one of the best pure point guards and Rondo got one. Chris prolly a hater lol

What I take from the fight and the early games so far? Rondo is engaged and he cares and it looks like the #Lakers have done a good job making him comfortable. These are conditions when he is usually very good. #watching

Viewers were thrilled to see Jessica Lange on “American Horror Story: Apocalypse,” which aired on FX and sparked 51,916 ERs. The actress had previously appeared in seasons one and three of the anthology series, and it was announced in late summer that she’d be back for this round as well. Her appearance drove a lot of positive emotion around the episode, with some people calling out how this series has a very talented female cast.

TONIGHTS EPISODE OF #AHSApocalypse WAS SO GOOD! All hail queens Jessica Lange, Connie Britton and Emma Roberts ????????????????. And wow yas @MsSarahPaulson for directing such a work of art

AHS has the most incredibly talented female cast. sarah paulson, jessica lange, kathy bates, taissa farmiga, lily rabe, frances conroy, emma roberts, billie lourd. they’ve made the series what it is. an all star cast all around, but the ladies take the cake

American Horror Story Apocalypse Episode 6 proves that Murder House is still the best and the scariest season ever. And Jessica Lange is the queen ???? #AmericanHorrorStory #AHSApocalpyse

Can we just go ahead and hand the Emmy to Jessica Lange the Emmy for best actress in a guest starring role? AHS delivered with her stunning monologue. Once again she was operatic and magnificent as Constance. A master class in acting. Brava.

The Los Angeles Dodgers squared off against the Boston Red Sox in Game 1 of the 2018 World Series, sparking 88,507 ERs during the Fox broadcast. The Dodgers drove the majority of emotion during the evening, and it was both positive and negative: fans chimed in from all over to root for the team or express hope that it would go down in flames against the Red Sox. (The Dodgers did indeed lose, with a final score of 4-8).

It’s time for Dodger Baseball ⚾️!
|| A LA Dodgers vs. Boston Red Sox baseball championship match-up hasn’t occurred since 1916 when Babe Ruth was still walking the field! At the time the Dodgers were known as the Brooklyn Robins ???? We couldn’t be more… https://t.co/BBmG9zJ4LL pic.twitter.com/62TKMpZNVx

#HR4HR if the Boston Red Sox , Celtics , Bruins and Patriots , all win championships this season in their sports am give up on sports. Because man am so sick of Boston sports teams being good. Come on Dodgers! #WorldSeries

Next to the Yankees, the team I hate most is the Dodgers. Can’t wait to watch the Red Sox feed them in this World Series And see the Dodgers lose in back to back World Series.

The key to successfully using CGI is to at least semi-convincingly integrate it with everything else, a task that many, many movies have failed to do over the last few decades. So let's take a look at some of the worst offenders.