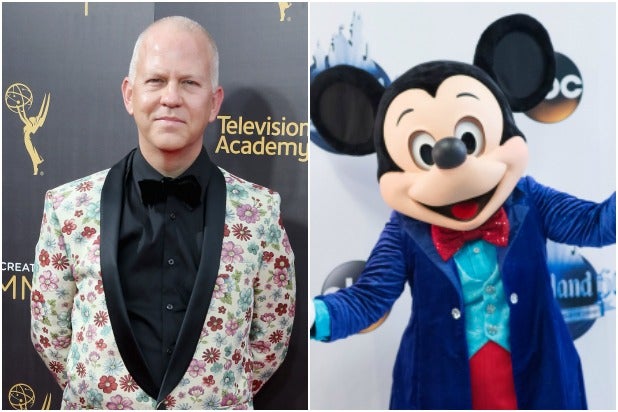 Even if 20th Century Fox Television enters the Mouse House, their longtime tenant Ryan Murphy isn’t moving in with them.

The FX and Fox hitmaker has signed a multi-year overall deal, which is reportedly worth as much as $300 million, to produce new series and films at the streaming service starting July 1, it was announced Tuesday. Meaning Murphy will be long gone before Disney’s $52.4 billion acquisition of Fox’s studio and cable channel FX, among many other assets, goes through.

So why would the mega producer rather set up shop at the streaming service than stick around to see his home of nearly 15 years Disneyfied? Well, have you seen his shows?

Murphy — who has executive producer credits on a number of Fox and FX titles, including “Glee” which ended in 2015, “American Horror Story,” “American Crime Story,” “Feud,” “9-1-1” and the upcoming “Pose” — is known for pushing boundaries in his programming, leading to a TV-MA rating being slapped on the majority of his series. (In case you were wondering, yes all of Murphy’s current shows will continue at their respective network homes.)

And Disney has made it clear they don’t want any R-rated content on their forthcoming streaming service, whereas Netflix is very generous with its allowance for nudity, violence and strong language. So you could see Murphy’s possible concerns there. Concerns that Disney CEO Bob Iger tried to quell after news of the merger first broke in December.

“I got a call from Mr. Iger, and I said point-blank that what I do is not specifically Disney, and I’m not interested in that and I’m concerned about that,” Murphy said at the Television Critics Association press tour in January, just weeks after the merger was announced. “I’m like, ‘Do I have to put Mickey Mouse in ‘American Horror Story’ now?'”

But Iger, whom Murphy described as “very sweet and transparent,” assured him that Disney is spending that good chunk of change on Fox assets because it believes in the properties the studio has produced and the creators and executives it employs.

“I think that Mr. Iger has done an incredible job of taking communities and keeping those families intact,” Murphy said, “Like Pixar, like Marvel. So I’m sort of interested to see what that company will look like before I make any decisions about where I’m going to go.”

It doesn’t look that conversation was enough to keep Murphy from joining the Netflix revolution, even though he once thought he would “literally be buried on the Fox lot.”

Also Read: American Horror Story? Ryan Murphy 'Emotional' Over Fox-Disney Deal: 'What I Do Is Not Disney'

Murphy’s career in television was launched by the success of the FX medical drama “Nip/Tuck” back in 2003, and the producer noted he feels a strong loyalty to Fox because the company gave him his break. All of the show’s

The prolific producer’s deal at Netflix, makes exclusive what had already been a growing relationship between Murphy and the company. Earlier this month the streamer picked up two seasons of the musical series “The Politician” from Murphy and co-creators Brad Falchuk and Ian Brennan. Murphy is also working on Netflix’s “One Flew Over the Cuckoo’s Nest” prequel series “Ratched,” starring Sarah Paulson.

“The history of this moment is not lost on me,” Murphy said Tuesday in a statement about his new deal. “I am a gay kid from Indiana who moved to Hollywood in 1989 with $55 dollars in savings in my pocket, so the fact that my dreams have crystallized and come true in such a major way is emotional and overwhelming to me. I am awash in genuine appreciation for Ted Sarandos, Reed Hastings and Cindy Holland at Netflix for believing in me and the future of my company which will continue to champion women, minorities and LGBTQ heroes and heroines, and I am honored and grateful to continue my partnership with my friends and peers at Fox on our existing shows.”

Murphy isn’t the first showrunner to make the move to Hastings’ company. In August, Shonda Rhimes ended her successful run at ABC for a multi-year deal with the streaming service. Rhimes’ stated her reason for leaving ABC Studios after 15 years was a desire for the creative freedom offered by Netflix, including fewer restrictions, more flexible episode orders and variable run times.